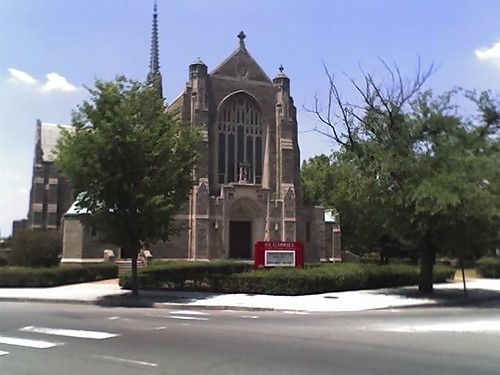 “I wonder if you caught the story on Channel 7 (WJLA) about St. Gabriel’s bells. The church (at Grant Circle) hasn’t rung bells for decades but recently paid $15,000 for some electronic bell machine and now a recording of bells is broadcast throughout the neighborhood every fifteen minutes from 7:00 a.m. to 9:00 p.m, the hour and half hour ringing more times than the quarter hours. Some of the neighbors are upset and disturbed by the addition to our urban soundscape. Others say they like the bells. The priest at the Church says something to the effect that to him the bells are a reminder of God and should be taken as a happy sound during these difficult times. Muriel Bowser is apparently looking into whether or not they are being rung within city ordinances. I’m somewhat surprised that they ring so often and also because they don’t ring on time: the quarter hour ring is a few minutes early, the other rings off as well. I also find it somewhat annoying (as a neighbor living nearby) that any entity can just begin making loud noise throughout the day without any consideration to or consultation with neighbors.

But I wonder how you and your readers who live near Grant Circle feel about the bells?”

I didn’t see the story but I have been following some discussion over at Petworth News. Editor Bill Crandall just posted a response from a member on behalf of the Church:

“Bill, thank you for taking the time to contact me on the bells, which are a replacement for the previous set of electronic bells, stolen from the church, which were installed many years ago by the late Bishop McNamara, our founding pastor. According to parish archives, when installed he announced plans to have the Angelus rung Morning, Noon, and Night. Five minutes before Mass, bells were rung to remind parishioners Mass would follow.

I have forwarded these concerns to Father Mateo and several members of the Parish Council.“

I can hear the bells from my house and for the most part I find them kinda nice. Of course that depends how much I drank the night before… But honestly if I lived closer to the Church I think I’d find the bells a bit too loud. I’m not saying they shouldn’t ring but since they are not real bells but just a recording – I think it would be reasonable if they lowered the volume slightly. What do you guys think?