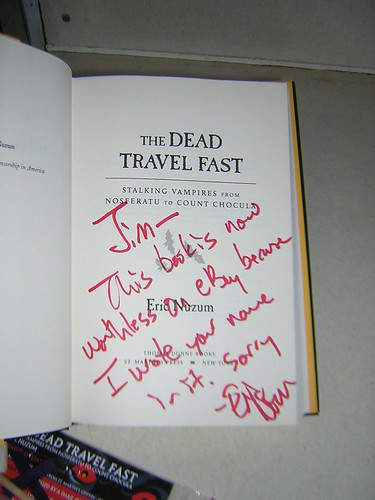 My copy of The Dead Travel Fast, BLAH, originally uploaded by revjim5000.

Petworth resident and PoP contributor Eric Nuzum‘s latest book is out in paperback this month. It’s called The Dead Travel Fast: Stalking Vampires From Nosferatu to Count Chocula. As the title would indicate, it’s about vampires–as well as death, chickens, fear, things that smell bad, the love of a good woman, and germs…but mostly it is about Eric’s attempts to understand why the undead are such a perennial favorite for people around the world. The book is available in bookstores or from Amazon. Eric will be doing one reading in DC this fall, October 30th (the night before Halloween) at the Barnes and Noble in Georgetown. I know it sounds trite but there multiple times I laughed out loud when reading this book. It is a quick read and hilariously captures this wild world of vampires and those who are obsessed with them.  I thought it’d be interesting to hear what it’s like promoting a book.

Kiss Me, I’m (Really Not That) Famous

Let me describe a scene:

I’m riding the Metro to work last fall when some guy looks up from his copy of Express and stares at me.

The guy on the metro was having his mind blown–realizing that the dude he was reading about in the paper was the same dude squeezed into a Red Line train in front of him. Usually the non-celebrities featured in newspaper photos are those cutting ribbons at construction sites, kids who’ve won spelling bees, and people who have done things they will regret for a very long time.

However, I am not one of those people. I write books.

What does this mean? It means for a week or two every year or so, I am the flaky crust about to fall off the outermost layer of fame. I’m on radio, TV, and print, like the Express feature. You’d think this would be glamorous and exciting. I’m not going to lie to you, it is really a bonafide thrill to see something you’ve slaved over published. You are a “Published Author.” Most people assume this comes with a degree of dignity and respect.

Since I’ve become a Published Author, quite a few people have asked me what it’s like to be famous. I reply that I haven’t a clue, but I think I’ve grasped what it must be like to be the first contestant tossed off Project Runaway or the week’s third inbred meth-fueled car thief featured on Cops: a temporary minor celebrity – fame with all the satisfaction and staying power of a cup of Ramen noodles.  Story continues after the jump.

If you haven’t heard about my book, it isn’t for lack of trying. Since the hardcover came out last fall, I’ve given more than 10 readings and over four dozen interviews. There is an extreme dichotomy at this level of fame. For every small blush of acknowledgement, there are many sobering moments of absolute embarrassment, horror, and dread. For every All Things Considered appearance, there were a dozen mind-numbing interviews where you have to pretend you haven’t heard the same tired questions seven times that week. The only thing worse than realizing you have six interviews to do in a day is realizing that while Christopher Hitchens is appearing on Charlie Rose that evening, you are stuck talking to a shock jock in Podunk, Illinois, with eight listeners. This is humiliation by proxy, and it works.

It isn’t unique to this book, I experienced the same thing in the past. Once I was doing a local television appearance in New York City. I was digging the free mini-sandwiches and beer in the green room when I was informed that the host likes to “high-five” his guests when they walk onto the set. High-five? Is this really necessary? All of a sudden, I found myself in a twisted quandary about whether I’ll look like a bigger goof by refusing to “high-five” or doing as I’m told. It’s pretty hard to pull off a good interview when the host offers a “high-five” and you, the Published Author, brush him off…on camera. A five-minute negotiation with a production assistant ensued, and I ended up “high-fiving” as requested.

Regardless of how you try to keep your head from swelling, it’s almost impossible not to get caught up in the manufactured buzz. It quickly becomes a self-feeding need, akin to developing a $400-a-day habit after your first hit. If you want your book to succeed, you have to do all this stuff. And you have to pretend to like it. And part of you does. However, the real satisfaction is meeting people who’re actually willing to spend 20 hours of their life reading something I’ve written. Rather than being humiliating, that is humbling.

The real lesson I’ve learned from all this exposure and attention is how much I love my normal life. As things settle down, I’m pledging to be a better co-worker, friend, and husband – taking time to pay as much attention to what’s going on in the lives of those I care about as they’ve been forced to pay to mine over the past year.

I figure I’m set on cocktail-party stories for life; now, I’m looking forward to having one.

more stories
Previous
One Year Ago…
Next
McCain or Obama?