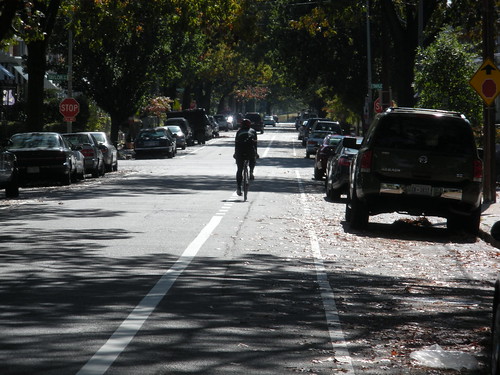 I was just thinking how many bike lanes have recently popped up and then I received this press release:

“We’re keeping our promise to make the District more bicycle-friendly,” said Mayor Fenty. “And to really move people out of their cars, we have to make sure the infrastructure is in place for them to pedal safely on our streets and trails.”

The District has also made a significant investment to ensure cyclists have a secure place to park their bikes with DDOT workers installing the 1000th bike rack this week. DDOT bike racks are located all throughout the city as part of the District’s commitment to provide ample parking for bikes.

“Under the Mayor’s leadership, we are making rapid progress in our bicycle program,” said Mr. Sebastian. “Few cities can boast about doing more to make two-wheel travel easier and safer.”

Men’s Health Magazine recently named Mayor Fenty as one of its 20 “Heroes of Health and Fitness” for his commitment to making DC more bike-friendly. Also, earlier this year, the District was named “Most Improved City” for bicycling by Bicycling Magazine. The new bike lanes and racks are just a couple of the bicycle and pedestrian initiatives currently underway at DDOT:

* A Bicycle Transit Center is being built at Union Station. The 1,700 square foot facility will be the first of its kind on the East Coast and will offer bicycle parking, rentals, repairs and retail accessories. It is expected to open for business in spring 2009.

* The SmartBikeDC bike-sharing program, launched in August 2008, is off to a fast start. More than 900 people have signed up and the program is averaging close to 150 trips a day (www.smartbikedc.org).
* The District recently joined a national campaign to advocate for a dramatic increase in funding for biking and pedestrian-focused programs in the next surface transportation authorization bill. This effort is led by the Washington-based Rails-To-Trails Conservancy which released a report this week illustrating the benefits of investing in active transportation options. DDOT submitted a case statement in support of the organization’s initiative.
* Construction is expected to start by the end of the year on Phase II of the Metropolitan Branch Trail. The MBT is a planned seven-mile bicycle and pedestrian trail between Union Station and Takoma Park, MD, that will connect underserved areas of the city with the region’s extensive trail network.

* The highly publicized Draft Pedestrian Master Plan was released earlier this year and is currently undergoing its final public review process. The plan recommends new traffic safety policies and roadway improvements to improve pedestrian safety and reduce the number of injuries and fatalities.

* Now that school is back in session, DDOT representatives are visiting schools as part of the DDOT pedestrian/bicycle education program. This program looks to educate both children and adults on safe pedestrian and bicycle practices.