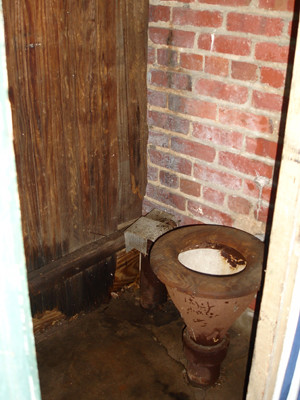 “Unbeknownst to me, when I bought my house I bought a three-bath place instead of a two-bath — when cleaning out my tool shed, I found out that it was really an outhouse. Noting that you haven’t had this discussion online before, I have to ask whether anybody else still has one? I think it is way cool and want to keep it if at all possible, but one of my neighbors said that DC inspectors forced them to remove them a while back. Is this still true, and if so, does having had mine blocked a plumber mean I’m okay? I can’t find anything in the DC website about it, except that apparently it is still a crime to burn an outhouse.

And third question – I’d love to know whether people would keep it, or get rid of it? Folks either seem to love it, or look at me strange for keeping it around. My real estate agent and my friends strongly agree with me about how cool it would be to keep it. The plumber asked why I just didn’t remove the whole thing, and I know neighbors who’ve had theirs removed, even recently. I am curious as to why remove something so quaint/bizarre/fun? Kid safety? Resale value? Mine’s safely blocked now, I have no kids, and I don’t plan on moving for a good, long while. Besides, I love the historical aspect, and it certainly makes for interesting conversation at backyard BBQs. But I am curious about what the wider world of PoPville knows and thinks.

P.S. Because I figure people will ask – there are pipes that lead down and connect to another, dry pipe. I had the pipes blocked to prevent rats and other interesting things from living below. And yes, because someone will no doubt ask – I do plan on keeping it blocked during those backyard BBQs – sorry.”

Wild. I would totally keep it if it were legal. What a cool novelty. But I too am interested in what the community thinks: would you keep the outhouse? Anyone know if it’s legal? Do you need a special permit for it? Super, super cool. 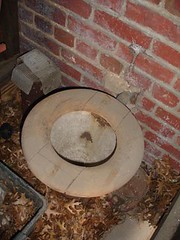