As a server in a restaurant, you quickly learn the industry tricks that keep you afloat when certain circumstances go beyond your control. You may be an all-star server, and you may have friends, but there are still certain tactics that are required at the right time.

Anne, the roommate of a girl who had an in-demand boyfriend, still did not like me. The newer servers liked me, yeah, but only because I was their in-house Chuck Woolery. Things were the most positive they had ever been for me at the restaurant, but they still were not ideal.

My main ambition was to win Anne over. The Prada-wearing Cuban was long gone – never again would I see him, but Anne was still a very prominent figure in my life. She was still better liked than I was, and it only made me want her to like me more. 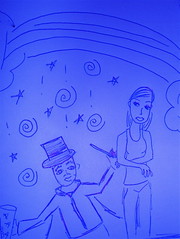 One day, I walked in at four to find that Anne was the only other server on the clock, angered by the poor planning on behalf of the management, but also less than enthusiastic to see that she would be sharing the floor with me. Little did I know that this would be the setting for the worst shift of my serving career.  Story continues after the jump.

One of my first tables sat themselves on the patio, which is a major no-no at most restaurants for a variety of reasons I won’t go into. Michael, the lead server, would instruct us all to ignore “self-seaters” for as long as we could, and we all happily obliged.

They were two sisters. One was about twenty-five, attractive, and refused to remove her shades or look me in the eye. Her little sister was about sixteen, good-looking yet awkward, and followed her sister to their table like a dog. Little Sis was great – she was polite, smiled, and listened to her sister as every younger sibling should do. Big Sis was a completely different story – she was rude, demeaning, and countered everything that Little Sis had to say. Despite the fact that I was insanely busy, Big Sis held me hostage at their table, mostly to be privy to the nonsensical monologues she was delivering to her sibling. 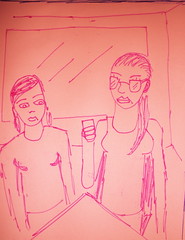 “You need to be more confident. You need to know what you want, and you need to stand up for yourself. People in this world will walk all over you if you don’t.” I don’t think the well-done burger they ended up ordering necessarily merited such grandeur, but I walked away, eager to get as far away from them as possible.

Then, enter the drunk patron. The way he was talking, I’m pretty sure Alaskans could hear him, and his rants in Spanglish put Big Sis’ to shame. Anne, smelling the drama, sat him at one of my patio tables. It was another one of those bitchy industry tricks servers use to get at each other or dodge the bullet when they can predict a crappy situation. I snarled my teeth into a “f— you” smile and reluctantly walked to the table to get a drink order.

At first he tried to get away with ordering two drinks at the same time, which we did not allow. Then, he attempted to buy a fifteen-year-old girl a drink who was sitting a few tables away with her family. Every time I would be in his line of sight, he would demand my attention in the most condescending of fashions – by snapping with his fingers. 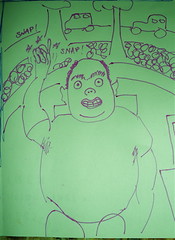 Eventually, the sisters and Spanglish ended up combining forces at a table for whatever reason. It was like putting two Disney villains together in the same film.

As I was standing on the line waiting for the sisters’ food to come out, and attempting to regain my cool, Little Sis came up behind me, tapping me on the shoulder. “I was just wondering if I could change my burger to some chicken wings?”

Gently but firmly I told her that her burger was already made, and about to come out to her table. She nodded and said, “Okay, that’s fine. I was just wondering.”

A couple minutes later, as I was grabbing their food, I felt another tap on my shoulder. “My little sister just told me you said she couldn’t have chicken wings.”

“Well, the food is coming out right now.” I demonstrated with the plates in my hand.

“Well, I’m trying to teach my sister that she can have anything she wants, and you telling her she can’t have chicken wings doesn’t really show her that. Now, I know that stuff gets sent back to the kitchen all the time in restaurants, so what I need you to do is send that burger back and get her some chicken wings.”

The manager on duty at the time, “Jane,” felt nothing but pity for me, and gave me the okay for the meanest industry trick of all. “Spill a drink on her. There’s no way she can prove that you did it on purpose.”

I considered it. Once their food was dropped, and once Spanglish snapped at me a few more times, demanding more drinks, I decided to go for it. Carefully, I placed two beers on my tray so that when I lifted one, the other would tilt to the left, and fall on whoever or whatever happened to be there. My heart racing, I approached the table, the girls sucking on their fingers to savor every drop of the buffalo sauce and Spanglish gazing at Little Sis’ breasts with disgustingly accurate precision.

As I jockeyed into position and lifted Spanglish’s beer, I spread my fingers wide underneath the tray – an instinct a server develops when they feel as though they are about to drop something. The second beer quivered, but did not fall.

“Careful there.” Big Sis’ eyes came the closest they had that day to meeting mine.

In the end, I could not bring myself to purposely spill on someone. I think my table deserved it, but it would have been out of character for me to do something like that. The whole situation had me shook up, and put me in my place – no matter how good a server I was, or what tricks I had up my sleeve, I still wasn’t first rate.

When the sisters left, I wound up crying underneath the sink in the server station, perched precariously next to Windex and bleach so that no one would see. When Anne came into the station to grab something, I tried to hide my distress, but, much to my surprise, she sat down next to me and put her arm around my shoulder and just sat there with me. It was exactly what I needed. 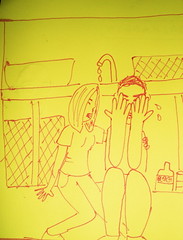 That’s when the scream came from the women’s restroom. Jane had walked in on Spanglish peeing into the garbage can.