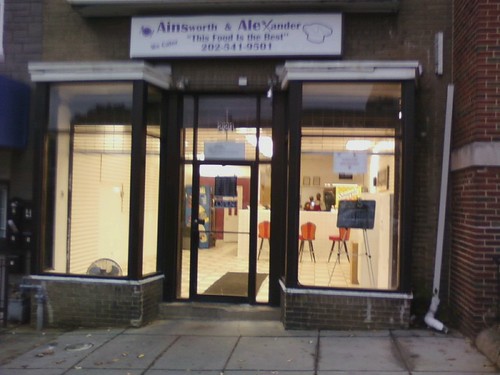 Thanks to a reader for sending, sounds very promising:

“I was walking my dogs this evening and for the first time in a long while decided to walk up Upshur towards Soldiers Home. I found this place Ainsworth & Alexander at 221 Upshur St.. You can see from the picture (sorry, cell phone pic while trying to hold 2 dog leashes) that it’s kind of bare bones inside. I took the pic meaning to send to you to see if you’d heard of this place and a man came out to ask if I needed anything. I told him I just wanted to tell a friend or two about the place and he offered me a few carry-out menus. His name was Grant and seemed really nice. He told me they had just opened up 5 weeks ago and that things were going well so far. They plan on offering WiFi service in the near future and adding more furniture. Menu looks decent.. Chicken and Waffles, Wraps, Salads, Sandwiches, Mac-n-Cheese, etc. They even have desserts! Perhaps if they were open later I’d walk down the block for a piece of cake after dinner at El Limeno. Also, it’s a bit late for them to set up now, but in the Spring they have a nice little patch of sidewalk out front where they could set up a few outdoor tables for dining.