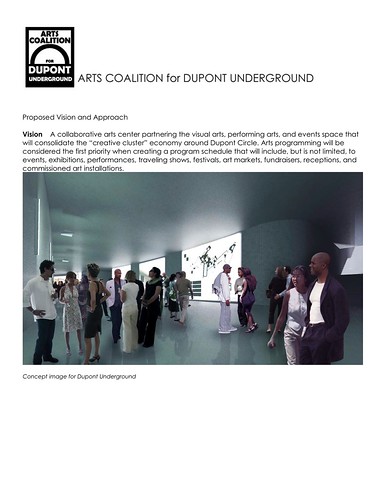 I received the following press release for a proposal to open up the underground space around Dupont Circle as an art space:

“WASHINGTON, DC‐‐ The Arts Coalition for Dupont Underground announces a campaign to re‐open the Dupont Underground as an exhibition and event space for the arts community. A consortium of galleries and arts organizations, the Arts Coalition for Dupont Underground, is seeking a long‐term lease from the city and funding from a variety of sources to re‐condition the old station and its tunnels as an exciting new addition to a constellation of galleries in the District. Uniquely sized and centrally located, the new space is large enough to accommodate up to 3000 people and will provide a critical new social space to catalyze efforts to revive the Dupont Circle area and put the District back on the cultural map of the nation.”