How was your voting experience? Seems like everyone I spoke with said the polls were dead quiet. 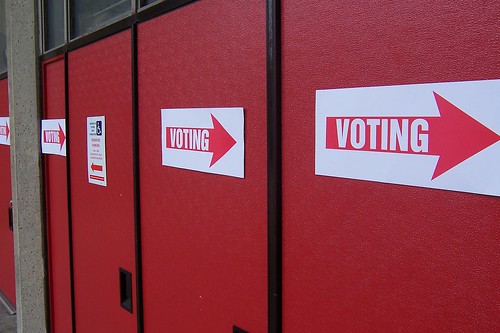 As a kid in central Pennsylvania I came to DC for Museum field trips. In the early nineties, I commuted from Baltimore City to DC for over two years for grad school. I moved to the burbs and commuted in to downtown for work, and then finally, a few years ago, I actually came to live here.

Besides getting my Taxation without Representation license plates and my zone parking sticker, the defining moment, for me, of being an actual Washingtonian was showing up to vote as one. (I’ll save Jury Duty for another post, since I think my two years are up again soon.)

My polling place in Ward 5 is a high school down the street. Thinking I might write about the experience, I brought my camera. I came expecting to meet at least some enthusiastic supporters. I found none. The grass in front of the school had a few signs for candidates, but that was the extent of the hoopla. Given that it is not a year to pick a Mayor, and the precedence of the national campaigns, I suppose it’s not that surprising. I settled for taking pics of the red Voting signs.

Despite the light drizzle, there were some poll workers taking a break outside the front door. There seemed to be an abundance of poll workers. Although it was the middle of the day, I thought maybe some people would stop by during lunch. The last time I voted, it was in the morning, but after the start of the work day, and there was a long line of lively octogenarians. Today, there was no line.  Story continues after the jump.

The overwhelming vibe from the poll workers was that they were grateful to see me. I was repeatedly thanked for showing up. Thanked for showing up for five minutes and doing what I consider to be a privilege. I thanked them as well. I know it’s an incredibly long day for most of them.

I was offered a choice of paper ballot or electronic voting. I’ve used the electronic method before but went ahead with paper this time. There were sharpened golf pencils at the booths, so no issue of hanging chads. I turned in my ballot to a machine that sucked it in like a dollar in a vending machine and the guy at the ballot machine handed me my reward. It always makes me happy to get the little oval “I voted” sticker. I’m wearing it now. 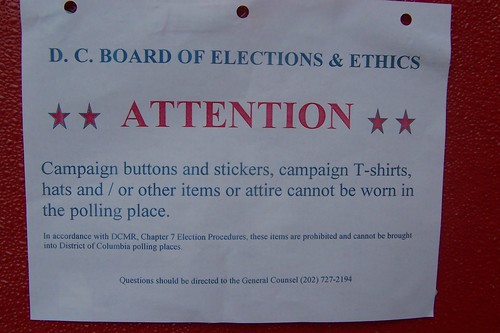