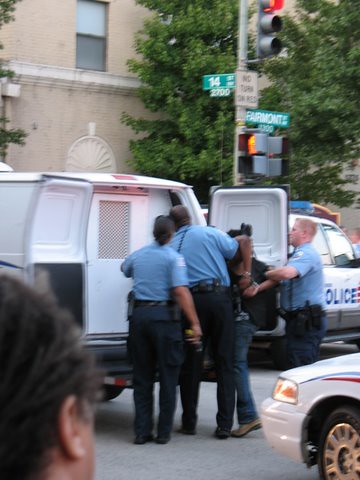 Yikes, I hadn’t heard about this until a reader sent in some photos and video. What an insane scene. The reader writes:

Another reader writes in to let folks know about a meeting on Wed. to discuss the shooting:

“I was wondering if you wouldn’t mind mentioning the next meeting of the South Columbia Heights Neighborhood Association Meeting in your blog. It will be this Wednesday, 8/20 at 7pm at the Josephine Butler Parks Center, 2437 15th St, NW. Ward 1 CM Jim Graham will be there to discuss this incident, as will MPD Police Chief, Cathy Lanier and Neicy Jones, who will represent the Faircliff Apartments, an epicenter of neighborhood trouble.”

Check out the disturbing video footage caught by a reader:

Thankfully suspects were apprehended. Did anyone else witness this event?

More Stories
I Don’t Know Why But This Sign Speaks To Me…It’s Apocalypse Tuesday Here at PoP: Photos of Fire at Warder & Rock Creek Church Road