I’ve been a pretty big fan of H Street for a while since my attorney moved near by. I enjoy checking out the new places and I hope you do as well. As such allow me to introduce Nichole who will be providing us with some H Street profiles. Her first one is a bar/small music venue Red and the Black. 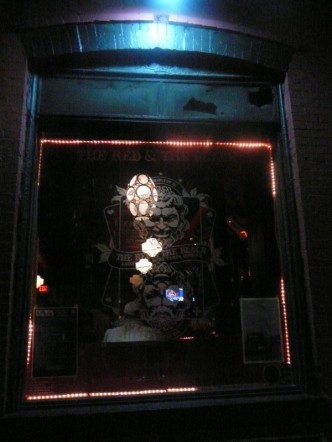 By now most people around town have heard of, if not stopped by, the Red & the Black on H St. NE. Opened in 2006, the Red & the Black was one of the first spots opened signaling the revitalization/gentrification/Englertization/hipsterization/what-have-you of the H Street Corridor.

A year or so ago, I found myself frequenting the bar weekly in what turned out to be a futile attempt to get a shot and a haircut on a Tuesday night for $12. It’s amazing how many people were willing to throw caution to the wind and roll the dice on a cheap haircut at a bar (myself included), because I never managed to get there in time to get on the list for a trim and a tipple. That deal is no longer offered (something to do with permits – I’ve been assured it’s coming back), but I found myself there this Tuesday night anyway to see what’s the what these days.

I’d checked online to see what the band playing upstairs was going to be. A group of guys from Raleigh, NC called American Aquarium. I checked out their MySpace page and they sounded pretty good, so I was glad to not have to shell out $8 to check out a band that wasn’t my style in the spirit of comprehensive reporting (covers at the R&B range from about $8-$10 – not bad at all). I got there around 7 in time for the last hour of Happy Hour (5pm-8pm weekdays; $3 rail drinks and beers regularly priced $5 and under) to find 3 other people in the bar, including one of the band members, and American Gladiators (the original) on the TV. The bartender Steve was friendly and informative, but not intrusive or overly enthusiastic (a plus in my book). While I waited for my friends to arrive, a few other folks wandered in and out, including Zack, another member of American Aquarium, and Vanessa, another bartender, who’d be working upstairs for the show. Conversation ranged from the relative merits of Orajel (I’ve had a terrible toothache, but I wasn’t about to let that stop me from my first PoP post) to talk about the changes in the neighborhood. 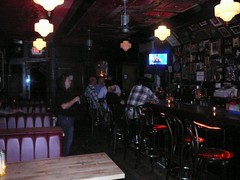 The food at the R&B has been the subject of generally negative reviews on blogs and websites around town, but I ordered the Jambalaya and found it perfectly adequate. When my friends eventually arrived, some of them ordered the Gumbo, which was much better. The best choice was the Spicy Cajun Nuts and the Zapp’s potato chips (I prefer the dill). I’d read that the R&B was looking to build out its kitchen, but Steve let me know that Mr. Englert’s priority is finishing up the H Street Country Club, set to open across the street (complete with mini golf!) but that it’d be coming soon enough. 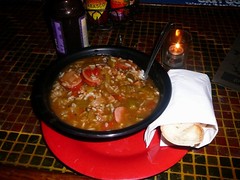 My friends arrived, and we decided to migrate to the patio out back that opened last summer. The patio’s a cool spot, but closes at 10, in deference to the neighbors behind the bar. I asked if it would be characterized as “dog friendly” (I like to bring the pooch along whenever possible) and was told for the most part “no,” unless they know your dog. 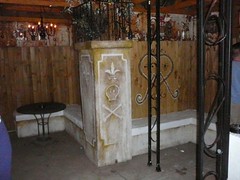 Our new friends in American Aquarium went on around 10:30, at which point we wandered up to the tiny upstairs to check them out. The upstairs of the R&B is slightly smaller than my apartment, and unfortunately for the guys in the band, wasn’t very crowded. While I dig the intimacy of the setting, I kind of felt guilty leaving before the band was done since they could obviously see the comings and goings of the crowd (kind of how I feel guilty yawning in the front rows of a play). 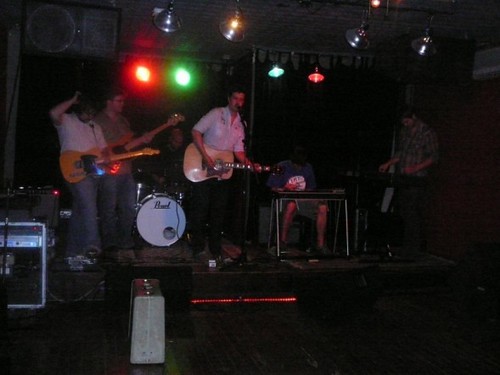 The Red & the Black is definitely a cool little spot for a couple of drinks or to catch a band. Because of its size, I don’t see myself popping in on a crowded weekend night, but it’s definitely a place to grab a quiet drink (oh, the jukebox downstairs is also great – and not generally super loud . Can you tell I’m 33 on the outside, and 85 on the inside?), watch the Olympics, and/or read a book during the week should you find yourself in the neighborhood.