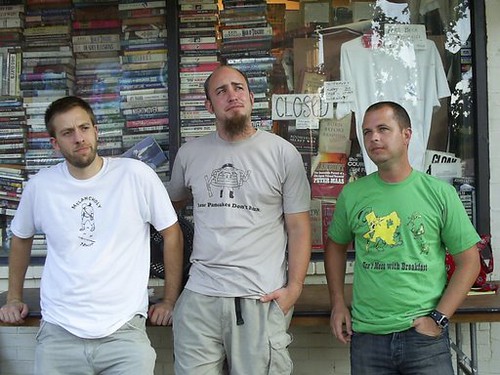 I came across the T-Shirt Insurgency maybe (my recollection is fuzzy) because of the article about them in the Post, and found myself browsing their site with glee. You see, I too am a rabid opponent of high fructose corn syrup and the cartel that controls its production and distribution. I ordered myself a shirt warning of the perils of this vulgar corn-bastardization, excited to wear it around town and spread the word. I started getting antsy when an upcoming trip to Ottawa was drawing near and my shirt had still not arrived. I sent the Insurgents an email and discovered the delay was an issue of the banks, but that my shirt would arrive imminently. What I could not predict was that my shirt would arrive, hand delivered by Matt, to my office in Old Town. 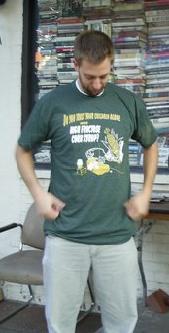 I wore my shirt out that night (pictured here, on Aaron – the evil corn there is better known as Fructose Fructose Ghali) and told my friends of these guys on the Hill who were nice enough to hand deliver it to me, and shared with them some of the Insurgents’ other designs. I returned to Capitol Hill Books (which serves as a quasi-headquarters for the Insurgency) a few days later and bought four more shirts for my friends. I was told that buying all the designs garners that purchaser a free ham. (No hams have been given away. Yet. A pound of Kale goes to any vegetarians/vegans completing the challenge.)

So I sent the guys – Aaron, Matt and Kyle (4th Insurgent Justin is ensconced in an undisclosed location in the Seattle area; I was told that they are an “Aggressively Bi-Coastal” bunch) – an email with some hard hitting questions, and I provide for you their answers here: Answers after the jump.

Who is T-Shirt Insurgency?

We’re 4 guys from D.C. who met around 4 years ago and realized we shared a certain appreciation for the absurd. But enough about us, let’s talk about militant breakfast items…

How’d you get started in the crowded T-Shirt market and what was your first shirt?
We’d drink a lot of beer and toss around odd ideas and phrases to amuse each other. The “Some Blood For Oil” shirt was the first one we ever ordered, and other people seemed to agree with us, so we decided to start selling them.

None of us knew anything about t-shirts, web or graphic design, finances, or marketing, so it took awhile to get going. Actually, we still don’t really know that much about any of those things. We do have pluck however. Pluck in spades.
What do you do when you’re not making T-Shirts?

A couple of us work at Capitol Hill Books on the weekends and at non-profit orgs during the week. One of us has a moving business, and another works at a bike shop.
What are your favorite Cap Hill/H St. haunts?

One of the alienating things about running an insurgency is that security risks often prevent the insurgents from hanging out in the same place at the same time ala Supreme Court Justices… Also, Aaron has to walk Kodiak, so he can’t hang out anymore.

We’re regulars at 18th Amendment and we all hit up the Argonaut on H Street on a semi-weekly basis. We would like to add that those places suck and no one else should ever, ever go there and kill the vibe for us.
What’s next for the Insurgency?

Lou Dobbs has been in our sights for some time, so he’s about to get insurged upon in our next design. After that, I’m guessing we’ll come up with a Bela Karolyi appreciation shirt of some sort.

Not satisfied with a few answers changing hands across the internet, I spent Wednesday evening with the Kyle, Matt and Aaron, following them around and witnessing their display of knowledge of many things trivial. We met at the bookstore for a quick photo session where a fair amount of time and discussion was given to the new mural on the side of the still-under-reconstruction Eastern Market. Of particular interest was this gentleman: 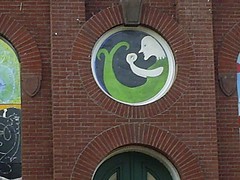 For reference, he’s a part of these murals on the south side of the Market: 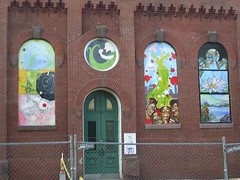 From there I followed the guys to the Argonaut for Trivia Night, where it was quickly apparent that they were regulars. (I should tell you – I’m not much of an interviewer. My notes from this adventure say things like “popular with neighbors” and “togetherness,” so I’m just going to go ahead and share my impressions of the evening.)

Choosing to call themselves Francis Bacon’s Pneumonic Chicken Discharge, I looked on and occasionally participated in the 7 Rounds of Trivia that followed. I’m pleased to report that the FBPCD were the winners of that evening’s bout. Their knowledge of things that win trivia contests is pretty formidable. And, this is what Insurging looks like: 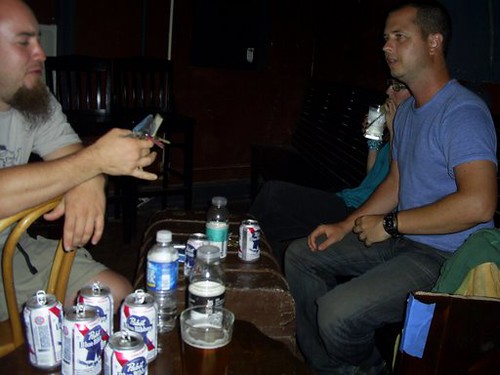 Things I learned while hanging with Insurgents:

They met canvassing for PIRG and bonded over not quite being the most invested in the cause.

They would someday like to form their own synchronized swimming team.

Matt loves manatees. And wore a lot of turtlenecks in high school.

Kyle has quite a cache of South American bus stories.

They have two new T-Shirts coming out within days; one is the aforementioned Lou Dobbs shirt, the other is something else entirely. Please check their site hourly for updates. (And buy some existing designs, like the most popular Guantanamo Bay tourist shirt, while you’re waiting to see what the future holds.) You can also head over to Capitol Hill books on Saturday and Sunday and meet the Insurgents and buy your goods in person.

I had planned on playing the ________ or __________ game with them on Wednesday evening but kind of forgot, so I sent them an email this morning. The answers I received were:

Coke or Pepsi? Well, we appreciate that Coke uses the Trujillo variety of Coca which is actually the most potent.

McDonalds or Burger King? Umm. Checkers. They got the Big Buford burger.

Heidi or Lauren? (that’s for Kyle, who I think accidentally confessed to having knowledge of “the Hills”)

Neither, I think, I like that dark haired one with the unnaturally white teeth…

Front or Back? We can only guess what this refers to….

Dogs or Cats? Meerkats and Manatees.

PBR or Schlitz? (High Life is an acceptable answer to this question) Whichever’s cheapest…

As a final note – the guys really are trying to reach across North Capitol St. and bring their shirts to all of you in NW, particularly at some of the upcoming street festivals and whatnot. However, for some reason that they didn’t understand, their permit request for the Crafty Bastards Fair in Adams Morgan was declined (despite their recent participation in the Silver Spring CB Fair). If anyone can help out with this and/or getting the guys set up at a booth anywhere else this fall, please email them at: [email protected].

That’s all for now from the East Side. Now, go and buy some damn shirts and support some homegrown irony. (And by homegrown, I mean Matt is actually FROM DC, so it’s a legit homegrown, not a fakey faker transplant homegrown.)