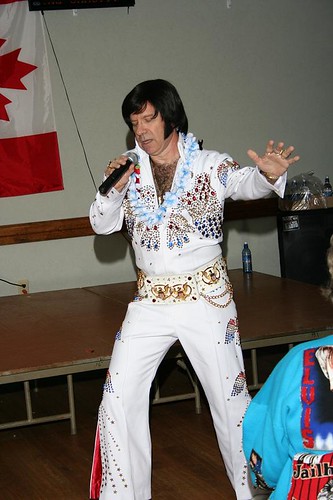 “Dear PoPville friends and neighbors:Before I get into all the hoohums and fancy talkin’, let me give the bottom line:Wednesday night is my birthday party at Looking Glass Lounge. I’ve hired an Elvis impersonator to entertain. You are invited.Okay, now for the back story…I don’t know how your summer has been, but mine has SUCKED ASS.You name just about any awful thing that could happen to someone and I know a person that’s experienced it this summer. I mean, in addition to the fucked up state of our economy and world. And in addition to the death, cancer, lay-offs, surgery, and other assorted terribleness that’s happened to the people I care about–I have not escaped myself. My beloved asshole cat died two weeks ago.One evening I was sitting around sipping a few drops of liquid comfort (i.e. Yukon Jack), saying to myself, “Woe is me,” when I had a moment of clarity and enlightenment. Invite continues after the jump.I knew that there was only one thing that could set all this straight. I knew there was only one thing that could make things right again. I knew there was only one thing that would take the frown of the summer of 2008 and turn that fucker upside down.That thing is Elvis. Or at least a close approximation of Elvis (with “close” still being a rather loose distinction).That’s when I called my new friend Elvis E and said, “Elvis E, you have paid tribute to The King in contests in Dewey Beach, Delaware (4th place in 2006); Pigeon Forge, Tennessee (5th place in 2007); Branson, Missouri; Buffalo, New York; Baltimore, Maryland; Frankfort, Kentucky; among hundreds of other retirement parties, weddings, and other occasions. Is there any way I could compel you to help my friends, neighbors, and me rise above our oppressive summer? And I ain’t talkin’ about the heat!”Elvis E looked at me and said, “Son, Elvis will be in the building.”I said, “That’s alright a momma.”And that, as they say, was that.Now if I were you, dear neighbor and/or friend, sitting at my desk surfing blogs while pretending to be doing something meaningful and important, and I read about this dude who was throwing open his birthday party for all readers–for free–I would question his…motivation.It’s very simple, really.It’s like that old bromide: drama is easy but comedy is hard. Sitting around and bitching about politics, gas prices, evil people, and terrible shit is easy. Deciding to rise above and make something fun happen out of nothing–well, that isn’t exactly hard. It is what makes life worth living.When I see a stranger sitting there smiling at the Elvis impersonator–I’m sorry, I mean “tribute artist,” then the stranger starts singing along with “Suspicious Minds”–well, I guess we aren’t strangers anymore. Then I know it’s time to stop being sad and that everything is going to be okay.The King becomes cathartic.Plus, I kind of think we’ll make this one of the most unusual gigs that Elvis E will ever play.So come on down to Looking Glass on Wednesday night at 7:30pm. Trust me, there will be plenty of Elvis to go around.”