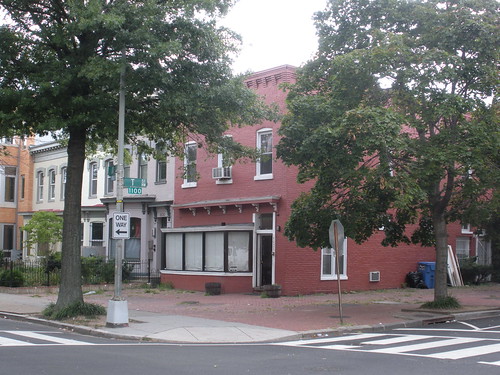 “Hi, I pass by this address on the southwest corner of 11th and T on weekdays a bit after 5 am and later in the morning , and I see bunches of folks, inside and outside, neatly dressed in black pants and white shirts. Later in the day, the placed it shuttered and shaded. I’m usually behind schedule when I pedal by and I’m a bit embarrassed to ask what’s happening there. Looks like they all work at restaurants, but it strikes me as a mini-union hall rather than a place serving food (and I would take the risk of being late and pull over if there were yummy odors from there). Can you enlighten me, please?”

You were on the right track. The building at the corner of 11th and T houses a food services temporary agency called “Kitchen Match”. So you were probably spotting some servers. The owner that I spoke to was super nice so no need to be embarrassed if you wanted to stop by and say hello.

More Stories
New Hampshire Ave Medians Get GrassYikes, Is That An Electric Fence?