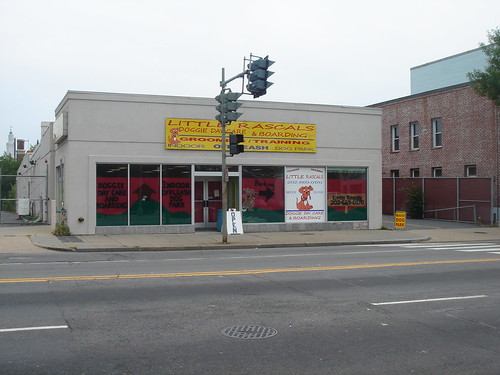 If you aren’t a dog person, you simply aren’t going to get it.It’s one of those things that when you mention it to non-believers, you find yourself offering all kinds of explanations and caveats.Doggie day care.Now, when I was a kid, our dogs were pretty low maintenance–or at least that’s the way I remember it. Unless something was hanging out of an orifice or the animal was bleeding (profusely, at that), the family dog seemed to get along just fine without fussing over it too much. Then again, I also have memories of being a young child sitting in the front seat of my parents’ car with them smoking, with the windows rolled up, and none of us wearing seat belts–so we probably aren’t the best model to use.Before we got our French bulldog, Lolly, I openly scoffed at doggie day care, thinking it was for all the crazy dog people who anthropomorphize their pets into “fuzzy children.” Then one day–I think it was shortly after the puppy decided to chew on a wall for entertainment–we decided to give it a try.Once you see a dog coming home from a day at doggie day care, you become a convert (we take Lolly about once a week for a full-day). It’s like they’ve been to a spa. They are relaxed and calm. It’s obvious they’ve spent the day working stuff out that a walk around the block or a quick butt-sniffing with the neighbor dog can’t accomplish. We moved to Petworth from Rockville about two months after we discovered doggie day care and were really worried about where we’d take Lolly. Then I saw a brief mention in a PoP posting by Intangible Arts about Little Rascals, a new dog day care and indoor dog park at 5917 Georgia Avenue. Story continues after the jump.Little Rascals is owned by Deborah Gomes and Jeremy Webb, Petworth residents. When they moved to the area, they had the same concerns as I did. Debbie had a job in the real world and had her own dogs in doggie day care. However, there wasn’t a place close by and frankly, she says, she felt that she could do better. Sanitation could be better. The dogs could be better cared for. There could be more flexibility with pick ups and drop offs. So, to make a four-month-permitting-inspection-public-meeting-multiple-hearings-hell story short, they found a place and opened for business.After some hunting, they decided on the old Curtis KIA building at the corner of Georgia and Missouri, just north of Petworth in Brightwood. “It was a little hard to envision at first,” she said. “When we first walked through there were all these parts and tires and carts and grease and dirt. It took months of cleaning.”The old parts department became a kennel area, the 3,000 square foot showroom is now the primary day care (which they can subdivide on busy days), and the former service area is now a 7,000 square foot indoor dog park. Ideally, they’d like to use the outer area of the property. Jeremy and Debbie pay rent on the exterior lots, but can’t use them. DC regulations forbid them from allowing the dogs to go outside. However, with DC’s summers, the idea of an air conditioned indoor space to run your dog quickly makes you forget about outside. And to answer the inevitable question–the dogs have a litter and saw dust area inside for doing their business, a routine the dogs seem to pick up on pretty quickly.For all their work in saving and reusing the old building, progress may catch up with them. The property is included in the Upper Georgia Avenue Land Development Plan. In short, in almost every version of the proposal calls for their building to be demolished. However, the plan also provides space for them in whatever new buildings are constructed.One of the greatest benefits of Little Rascals is not something that’s there, it’s something that isn’t there. They screen dogs before they can use the facility, board, or stay in day care. Shots have to be current, adult dogs have to be spayed/neutered, and dogs must pass a canine good citizen test (read: no aggressive dogs). “We turn away 90% of the business that walks through the door,” says Jeremy. “Just because of shots or aggression.”The work of starting a new business, plus the commitment of keeping the staff ratio to one person for every seven dogs, means that Debbie and Jeremy’s life is Little Rascals. No, seriously, it is their life. They rarely leave.“We alternate going home to take showers in the morning,” says Debbie. “But outside of that, we’re pretty much here all the time.” And she means all the time, with summer vacations bringing a constant stream of boarding dogs, they haven’t slept in their own house in months. Debbie says that if they went home when they had boarding dogs, she’d just worry about them. “We’re at the point now where we have enough staff that one of us could be gone more often than we are,” she says. “I just don’t feel comfortable.”Oh, and one of the most surprising things about Little Rascals? It doesn’t smell like dogs.Nope–not on any of my trips there have there been whiffs of #1 or #2 or dirty fur. However, that isn’t meant to imply that it doesn’t go on (they are dogs, after all). Debbie and Jeremy seem to always have a mop in their hands. “We get peed on sometimes,” she says. “That’s just part of the job.” 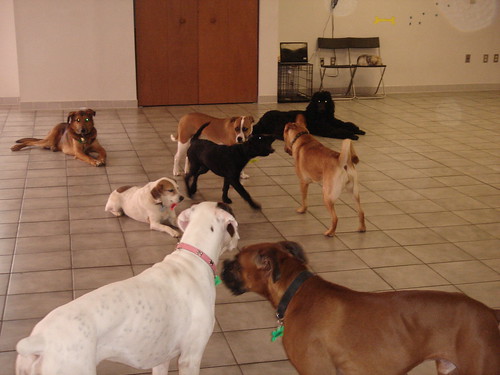 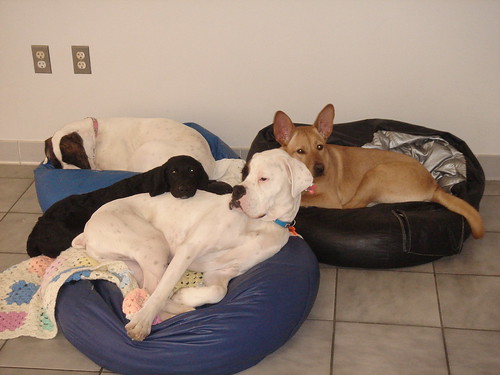