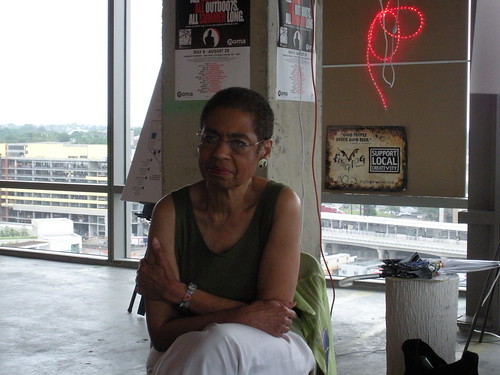 I had the opportunity to speak with DC’s Congresswoman, Eleanor Holmes Norton, along with a few other local bloggers. When DCist posts their story I’ll be sure to update with a link because I’m certain their post will be far more comprehensive than mine. Anyway, this was pretty cool. We all met at the fantastic art exhibit, Artomatic, this past Saturday at 5pm. The meeting started by watching a tribute to Congresswoman Norton by comedian Stephen Colbert. It was pretty surreal watching the congresswoman watch the computer screen with a series of her appearances compiled from the Colbert Report on Comedy Central.

Norton was very complimentary to Colbert. She said, “Colbert has single handedly done more than anyone else on getting the word out for district voting rights”.

I had the opportunity to ask the Congresswoman two questions. I asked her what she will do as a district leader should the Supreme Court overrule DC’s handgun ban. She gave quite a lengthy answer mostly focusing on what she did when the Congress attempted to persuade the District to adopt the death penalty. To make a very, very long answer short, she basically said that she doesn’t believe that the Supreme Court will make a ruling without any wiggle room. She believes that even if the Supreme Court overrules the ban the District will still be able to pass very strict handgun controls laws that will make it extremely difficult, not impossible, for District residents to obtain handguns.

As this blog is not very politically focused I also asked her what neighborhood she lives in and what were some of her favorite restaurants and stomping grounds. Norton replied that she currently lives in SE on Capitol Hill. She moved there because she had previously lived in a great Brownstone in Harlem and was looking for a similar type of rowhouse. The closest home she could find to the great brownstones of Harlem was a three story whitestone in Capitol Hill.

I did not know that Norton also grew up in DC. She is a third generation Washingtonian and grew up in our neck of the woods at 712 Kenyon Street, NW. Interestingly, she identified 712 Kenyon Street as growing up in Petworth. I think today most people identify 712 Kenyon with Pleasant Plains or Columbia Heights. I thought it was interesting that she identified that address with Petworth (and she didn’t know I was the “Prince of Petworth” so there was no pandering there). As for some of her favorite restaurants, the Congresswoman replied that she doesn’t have a lot of time to go out.

Like I said, I’ll be a bit lazy because my notes were not spectacular so when DCist and DC Metblogs post their stories I’ll be sure to link. The congresswoman also discussed, the renewal of the $5000 first time homebuyers credit (it will be renewed), future development in DC (across the Anacostia with the future home of the Department of Homeland Security at the old St. Elizabeth’s Hospital in Ward 8), Union Station and of course DC Voting Rights. All in all it was a great experience. She is supremely passionate about DC Voting Rights and DC in general. I feel pretty lucky that we have such a determined representative in the Congress. Now if she can only get a vote…