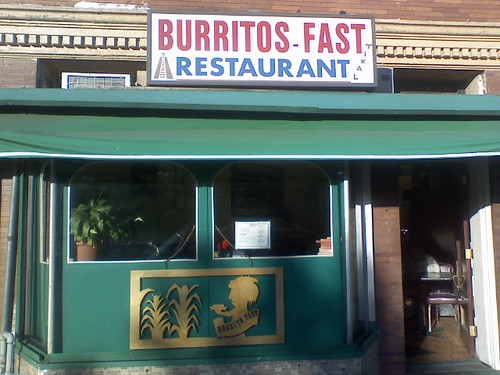 This was a big weekend for me. I finally made the jump from group living and moved into my very own apartment. Technically I am no longer a resident of Mount Pleasant, but I’m not far from the official border line, and will continue to consider myself as such. I love this neighborhood, and home is where the heart is, right?

Anyhow, in honor of my last night in the ‘hood (and because I was in a bit of a rush to make it to IKEA before it closed) the boyfriend and I got ourselves a couple of burritos and a tamarindo from Burritos Fast. It’s an unassuming little joint among the Laundromats, liquor stores and other restaurants lining Mount Pleasant Street. They’ve got a pretty sweet little wooden sign hanging out front though. I wonder if it meets PoP’s standards for a cool city sign?! The menu is limited to a choice of a burrito or tacos, and you choose between meat or chicken or the two vegetarian options. Then you tell the person behind the counter what you want and they make it right there in front of you. Inside there are only a couple of tables and a window counter, so we decided to take our dinner across the street for a little makeshift picnic in Lamont Park. Conveniently there were two guys having a guitar jam session right next to us, so we even had a little background music – reason #278 why I love Mount Pleasant. Story continues after the jump.

So, “how was it?” you ask. Well, it was fast. I know it’s a chain, and it’s nice to support smaller local establishments, but I have to say I still like Chipotle better. My burrito was tasty and the meat was actually juicier and seasoned a little better than Chipotle’s, but the rice was kind of overcooked and the guacamole didn’t have quite the kick I was hoping for. The tamarindo, however, was pretty delicious. No complaints there. Perhaps we are just not skilled burrito-eaters, (friends who have shared a meal with said boyfriend might argue that he is not a skilled eater, period) but they were kind of unwieldy and fell apart easily, and we both wound up opening them up and picking at the insides.

Overall, it was good enough and I would go back, but save for the company, the impromptu concert, and the great springtime weather, I found the entire burrito experience to be less than stellar. Has anyone been there and loved it? Got any recommendations for a great burrito place that isn’t a chain?