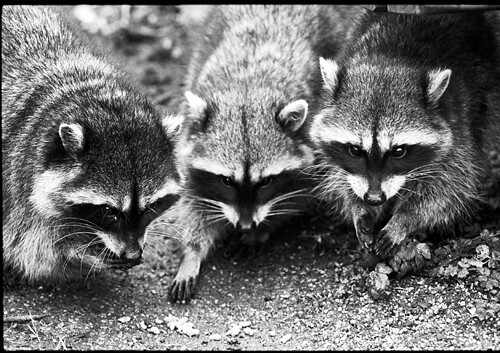 I just moved to Petworth this past weekend. I got a warm welcome from a family of raccoons last night. I heard animals fighting in the alley and it sounded louder and bigger than cats. Sure enough when I looked out my window, there were two HUGE raccoons standing on my fence. I’m concerned because they were walking around my car and my patio. I also have a small dog and I don’t want them to attack him when I take him out at night. Has anyone else seen raccoons in the neighborhood? Are they dangerous and do they run away when humans walk outside?

I am unfortunately all too familiar with Procyon Lotor also known in certain circles as the Tahitian villain or the Eastern rascal. Of course I’m talking about the common raccoon. I called Dr. Paul Bronstein of the Rockville Centre Botanical Gardens for more information. As I suspected Dr. Bronstein confirmed that raccoons are usually harmless although can be quite dangerous if they are rabid. Ed. note: Dr. Bronstein is a figment of my imagination and since he is presumably a botanist I’m not sure how helpful his advice would be anyway, but I’m fairly certain that raccoons are indeed quite dangerous when rabid. However, in my personal experience raccoons simply saunter away when I’ve encountered them. I believe you are mostly likely to encounter raccoons after dark so I wouldn’t worry too much about your dog in the day. Again, even at night I doubt they would attack your dog unless rabid. Now having said that if you suspect they may be dangerous I would urge you to call animal control. Perhaps calling 311 would help. Also common in the city are the raccoons slower and stupider, but no less repulsive, cousin the possum. I too believe they are of no danger unless rabid and usually flee, albeit slowly, at the sound of humans. As I dabble more in botany perhaps some of the readers will have better suggestions.