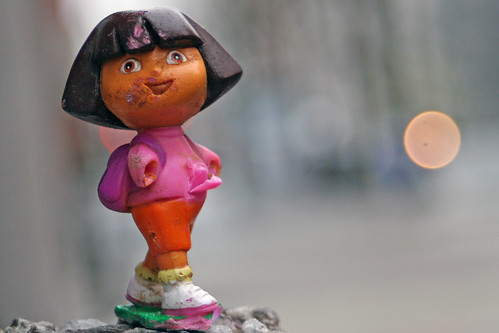 The great Intangible Arts is back for volume 3 of his intangible tales. If you missed the previous entries check out Vol. 1 here and Vol 2 here. Volume 3 explores the city through the eyes of one on crutches.

That was the line that made the 1968 Monkees movie “Head” one of the strangest things put to film. Very little of it made sense. But the first time I saw Timothy Carey’s character (Lord High ‘n Low) stagger across the screen, drooling and mumbling like a mutant towards Mike Nesmith and the Monkees as they burst into laughter, and then he delivers that line….. it became etched in my brain as THE BEST moment in film history! YES!

But recently, I’ve had a new reason to remember that scene:

My wife experienced a random accident at the Adams Morgan dog park a few months ago. A couple of dogs were running around, naturally. They weren’t watching where they were going and neither were we. Suddenly the two mutts ran into the side of her right leg, just so. It was a one in a million hit, which caused the bottom of her thighbone to crush the tibial plateau, creating a split in the tibia and a fracture within the base of the knee-joint.

She didn’t need surgery, just several weeks in an immobilizing brace and walking with crutches. Neither of us have broken anything before, so this is all new territory. And by the way, dog owners: Pay attention at the parks. Seriously. The next break could be your own.

I’ve written previously about how the dog changed my perception of the neighborhood: It caused me to look down, for example, and to notice dangerous litter. I was re-discovering my neighborhood through a new set of eyes.

Now, we’re doing it again, but from the point of view of an “access-challenged” person. We both love to walk, and the crutches have changed everything. Even the simple pleasures of our neighborhood aren’t so simple anymore. Intangible Tales continues after the jump. 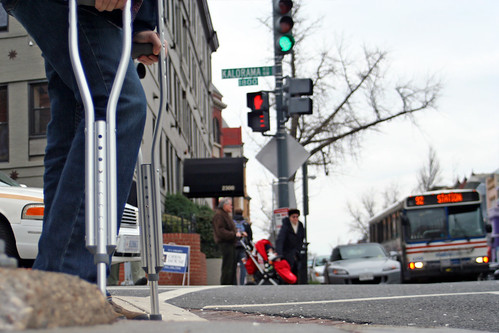 Primarily, one of our favorite neighborhood pleasures is very different now: the casual visit to a pub for a pint and a meal.

Not all pubs have booths, or the kind of seating that works with someone who can’t bend a leg. And of course, the crowded happy-hour venues are impossible. We tried to make it work, but ended up going out to the suburbs, to the national-chain “family restaurants” with their nasty food and swill-for-beer selections. We did this simply because we could rely on a wide open floorplan and seats that she could manage with the busted leg.

Locally, we tried the Looking Glass Lounge early on, but could hardly get into the place, due to the tall step at the front door. Truly, we had no reason to REMEMBER a tall step at the door. We don’t blame the ‘Lounge of course: She was still learning to manage the crutches and I was still learning to help without killing her accidentally. Eventually we figured it out and had a great time, but it was a struggle.

The Wonderland was much easier, simply because the entry is all on the same level. And we tend to go during off-peak hours, so the crowds weren’t a problem and seating was plentiful.

But other places have been intensely challenging for reasons we could never predict: So-called “handicap access” bathroom stalls that are roomy but have impossibly heavy doors that can’t be managed. “ADA Compliant” my pale ass! It’s meaningless!

We both find the suburban chain restaurants to be soul-killing places, and so we tried to stay in the neighborhood and deal with our favorite spots when possible. We love the Florida Avenue Grill, for instance, but the tight quarters in there make it hard to manage on a busy Sunday morning with a pair of crutches and a leg forced straight. 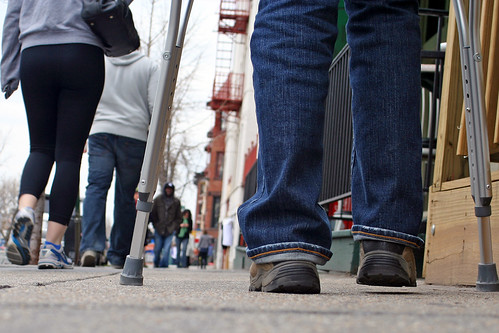 Beyond the restaurant scene, just getting around town required some new thinking. Driving is almost never a solution, even in healthier times. You can’t expect to find parking in much of NW anyway, so why bother? Our whole point of living in an urban environment is to have things close. Hence, if we ever bothered with the car, it usually meant going farther out, to the devil ‘burbs.

After a while, we remembered seeing Metro Access vehicles around, and finally looked into that. It requires an application for the service (and a doctor to vouch for the patient’s need), followed by an interview by a WMATA agent, and if all goes well, you move on to the lightning round, spin the big wheel, and win a ride in the big white van.

I respect Metro’s need to screen people before extending the service, otherwise it might be abused like a cheap taxi service. But it didn’t seem like a good fit in our case. Her injury is temporary, and it seems like she’ll be healed by the time we perfect the art of getting around. Maybe Metro Access could’ve helped us if we had looked into it sooner.

So where are we now?

The leg is still healing, and we still have a huge appreciation for living in this crazy nexus of Petworth, Columbia Heights, Howard, and Park View, where folks (without broken legs) can walk to most everything they need. But when we’ve had older house-guests, or folks from out of town that aren’t robust walkers, we realize just how vital it is to WALK in the city. Lucky for us, it’s a great pleasure. When no bones are broken, that is.

Was there a point to this story? uh, perhaps….

Obviously, small businesses can’t provide an easy experience for all patrons. I mean, it’s taken us weeks to even TRY Red Rocks, simply because of the steps leading to their door. But is it reasonable for all small businesses to be perfectly accessible to everyone? It doesn’t seem possible. It would be INSANE if everybody installed ramps and elevators and braille and germ-free this-and-that. Particularly in a city of gorgeous old buildings, as we have here. So we’re not complaining, just learning to appreciate the world from a slightly twisted viewpoint.

But despite all the challenges, home is home. AND we also have a new respect for the destructive potential of a happy dog running at top speed. I’m tellin’ you: be careful out there.