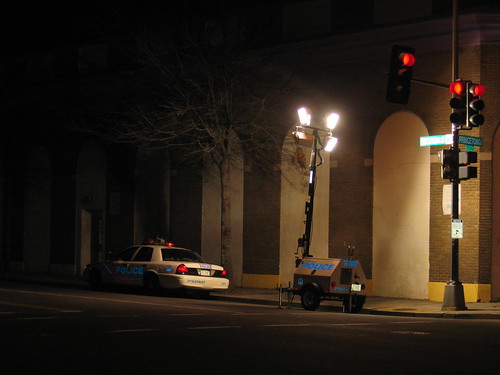 It is one of my all time favorites. You know, it’s the one about World War II in Shanghai with John Malkovich and a young Christian Bale. Anyway there is one scene when they are in an internment camp and Christian Bale’s character visits the infirmary. At the infirmary he realizes that they put a mosquito netting around a patient, not to keep out mosquitos, but to signify when a patient is about to die. The mosquito netting has no practical function other than a psychological one.

That is what these police flood lights remind me of. A reader wrote in today to tell me about a murder in an alley near Princeton St. as reported by NBC news. And lo and behold tonight there was a big spot light up. Now what is the purpose here, the guy has already been killed. I know with some gang violence the spotlights aim to deter revenge attacks. Maybe that is why they used it here. But still does this light make anyone feel better and/or safer? All I could see was a giant mosquito netting.