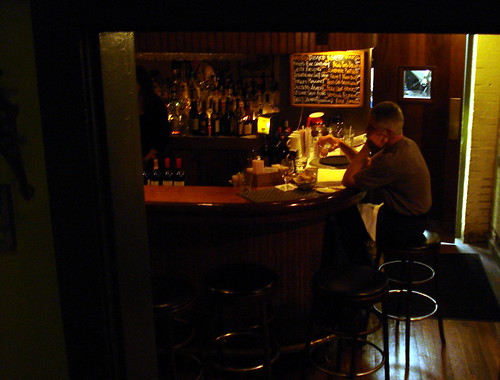 “When she was new to this city, my mother, a North Carolina transplant, found work here as a cook and waitress. When I was an infant she stowed me in a basket underneath one of the prep tables in the kitchen so she could keep me close while she was working. Some of the waitresses who doted on me then still work here today. Eventually my mom left the Tabard, went back to school and took a job teaching Pre-K. Despite moving to the burbs, she remained close with the staff and made sure to use special occasions (like my high school graduation) as an excuse to come back and have a meal.

It’s been nearly three years since my mom was killed in a car accident. In that time, almost imperceptibly, my dad has made the Tabard his unofficial home-away-from-home. He likes to sit on this stool, near where the waitresses pick up their drink orders, and make conversation while nursing his Jamesons. Sometimes, when I get the chance, I’ll join him here for dinner. There’s not a place in the city I’d rather be.”