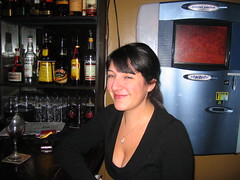 As I was walking to our meeting last Wed. evening I passed a neighbor who asked me if I was going on one of my walk abouts. I replied no, I was going to do an interview. So who was I interviewing? My neighbor wanted to know. At this moment a female voice is heard replying, me! She was standing on the porch of a house waiting for the occupant to answer the door. It turned out Valdez had found a government id badge on the sidewalk and was knocking on the doors of nearby houses to see if anyone inside had lost their id badge. I’m told there are two types of people in this world: those who knock on doors after finding a government id badge and those who just keep walking.

I had the opportunity to sit and talk with The Washington City Paper’s Angela Valdez last week at the Looking Glass Lounge. Valdez, 30, hails from Portland, Oregon and is a recent DC transplant. Before coming to DC, Valdez had attended New York University where she studied journalism and international politics. From NYU she went to Flint, Michigan where she had a one year internship at the Flint Journal covering the labor beat. One of her most memorable/disturbing stories from this time period include the covering of a school shooting where a six year old shot another six year old. Following her internship Valdez headed off to the Philadelphia Inquirer to cover the suburbs for two years. While in Philadelphia Valdez covered many crime stories including one where a guy killed his wife and buried her in the drywall of his basement. At this point Valdez became a bit tired with the newspaper industry and “rebelled to Grad school.”. [Profile continues after the jump.]

Valdez attended the University of Pennsylvania for a PhD program in history. She received her Masters Degree from Penn but dropped out before completing her PhD because “after a while she missed journalism.” Journalism brought Valdez back to her hometown of Portland where she worked at Willamette Week (Portland’s Alternative Weekly Newspaper.). She stayed in Portland for one and a half years before switching to Seattle’s alternative weekly, The Stranger. Valdez was at The Stranger for around 7 months when she got the call from the Washington City Paper. Valdez had always wanted to work for the City Paper because she especially liked their long form articles. Valdez has been a staff writer for the City Paper and a resident of Petworth since March 2007.

Valdez chose Petworth because she found an affordable place on Craig’s List and really got along with her roommate who is originally from Philadelphia. Before committing to Petworth, though, Valdez did do some research on the neighborhood blogs and liked the feel of the community.

Unfortunately Valdez’s opinion of Petworth became a bit tainted when she was nearly Vespa jacked shortly after moving to the neighborhood. You can read about the incident in her own words here. But basically she was held up at gunpoint right in front of her house by some teenagers. The teenager demanded her keys and Valdez smartly complied. Perhaps using more questionable judgment Valdez stayed in front of her house instead of fleeing after turning over the keys. In what can only be described as a ludicrous situation, the mugger was then unable to open the vespa lock and demanded Valdez’s help. At this point Valdez pleaded that she was a nice person and asked why the mugger was doing this to her. In a very lucky turn of events, the mugger threw the keys down and fled with his accomplice. Valdez was “a little shaken up” after that experience but “knew that it was just kids” so she “got over it.” Valdez concluded “it is very hard to rattle me.” Indeed. I think I was more rattled by her recounting the story than she was rattled by the actual experience.

With that unfortunate experience behind her, Valdez has now come to appreciate Petworth for its beauty. Valdez contrasts Petworth with affordable neighborhoods where she lived in Portland and Philly that she describes as ugly while Petworth she feels is “pretty”. Specifically, she likes the well maintained homes with their lawn sculptures. Furthermore she likes the fact that Petworth is a diverse neighborhood that feels like a neighborhood and not a new development. In the future, Valdez hopes to explore the northern parts of the neighborhood that she simply hasn’t had time to visit due to an intensive work schedule.

Valdez also praises Temperance Hall/Looking Glass Lounge. She likes the fact that it is right by the metro and provided a good introduction for her to the neighborhood. Before Valdez knew many folks in the neighborhood she would often come to Temperance Hall to chat with the bartenders and look over her notes for upcoming articles she was working on. Valdez concludes, “I really like having a neighborhood bar”. And I concur.

In certain circles, Valdez shot to fame in DC after the publication of her cover story on the Late Night Shots folks. Valdez marvels at how the piece became the talk of the town. “I was just reporting”, she said, “I just spent time with them [Late Night Shots Members] and wrote down what they said”. Valdez explained to me that many of the members are really nice folks but there is also an element that is “the worst of the worst” which seems to bring people together because “it is something we can all laugh about.” If you haven’t read the story yet, it is an absolute must.

Additionally, stay tuned for this Thursday’s cover story in the City Paper which was written by Valdez. She says it is the piece she is most proud of. The piece tells the story of a female prisoner that she has been working on since arriving in DC.

All in all, Valdez is really one of those people who make Petworth a great neighborhood to live in. She is smart, has an interesting job, drinks (albeit mostly wine), can laugh at the absurd and doesn’t get rattled by a near Vespa jacking… and she makes the effort to return lost government id badges that she finds on the sidewalk.