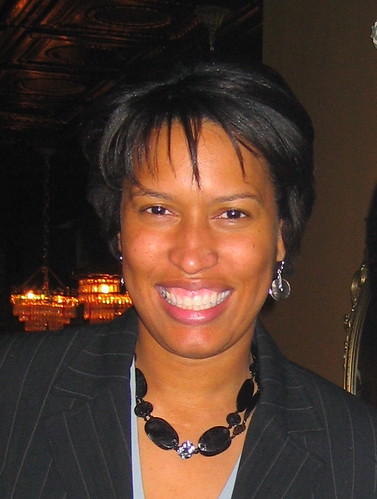 Council Member Muriel Bowser was kind enough to speak with me about some of the issues she has been working on since taking office. I have to say when I left the meeting I was feeling extremely optimistic and I was reassured that Petworth has a genuine advocate looking out for us. One of the most exciting things I learned was that Bowser is working with the people from Safeway in order to make sure they renovate their property on Georgia Ave. Additionally, I was encouraged to learn that Bowser has been in close contact with the Metropolitan Police Department’s Fourth District Commander to ensure that the recent spate of muggings near the metro are properly addressed. And finally I was glad to learn that the proposed homeless shelter move to Georgia Ave. is far from a done deal and a zoning meeting is set to address this very issue. Below you can find a summary of the entire discussion.

PoP: How have your first few months in office been, any surprises?

Bowser: In a lot of ways it is exactly what I anticipated except the volume has been incredible. I am grateful for the generosity of people, everyone has been really supportive and welcoming. I think I underestimated the significance of the timing in which I came into office. Coming in at the end of a session and and the beginning of a new administration there have been a number of conference hearings and confirmations. One day you are on the campaign trail and the next day you are talking about the strategic direction of the schools, you literally have to jump right in.

PoP: Can you address some of the concerns about the recent muggings near the Petworth metro?

Bowser: We recognize the incident as very serious. We take every incident, when an individual is attacked, very seriously. However, I don’t see it as a crime wave. But the residents are naturally very attentive and put a spotlight on it with the hopes of action being taken. Now, we can’t put an MPD patrolman on every single corner but we can increase patrols and this what we have done. We have to let the criminal know that this is not a place where crime can happen and you’ll get away with it. At this point, criminals are getting away with it. This is a citywide issue and we have to make sure not only that MPD is patrolling but that they are also apprehending the criminals so that they can be prosecuted.

Increased patrols are done and that is happening right now. We’ve noticed two areas in Ward 4 that need increased patrols and we’ve done that. The first thing I do after an incident like this is call the (MPD) commander and ask if anyone was arrested. If not, I ask why not? Then I ask if there are any suspects, have the cameras been looked at. The ultimate goal is getting the criminals off the streets not simply adding more patrols.

PoP; What is being done with regards to the proposed homeless shelter moving to Georgia Ave.?

Bowser: Ward 4 is already the home to many social service institutions. Jim (Graham) and I have talked and I really feel like this is adding more than our neighborhoods can absorb. I am working with Jim on a proposed overlay to Georgia Ave that will involve some zoning changes. I will continue to work with Jim on this issue. In general Jim and I are in agreement on this issue.

PoP: What would you like to accomplish before the next election?

Bowser: We want to get movement on Georgia Avenue and the commercial corridors. We’d like to pursue critical oversight to DCPS (Public Schools). We want to be out in every community community to know about their concerns in Ward 4. Almost every night we attend a community meeting, we are answering emails, addressing listservs because we want to be on top of the issues and concerns of the community.

PoP: Can you tell me more about movement on Georgia Ave?

Bowser: I’m going to do an economic development plan and tour for people interested in investing as well as for residents in the community. We have to get from drawing a plan to bricks and mortar. This is a great opportunity for the community to deliver their input to the investors and realize plans into action. In Nov. I will do a big tour and forum.

There is a big opportunity in Petworth. With Park Place being completed in a year and a half the surrounding area will attract continued investment.

I’ve heard from people in the neighborhood that the Safeway is not good. So we brought in the Safeway people to talk to them about how they can become a good neighbor. I’ve spoken with them to encourage them to redevelop their current location. We have a lot of people traveling out of their neighborhoods to go grocery shopping and that is unacceptable.

We all know it takes a lot of planning but we have got plans in place so now is the time to secure resources before other neighborhoods in the city suck up all the resources. I am laser focused on securing the necessary resources.