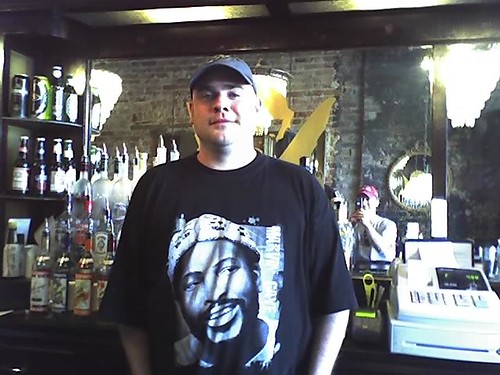 Allow me to introduce the man behind many of the good drinks you’ve tasted and the good music you’ve listened to at Temperance Hall.

“I may be the only bleeding heart liberal from Alabama”

Scott, 34, spent his formative years in Alabama but moved to Petworth a little over a year ago. He originally came to DC because his then wife got a job working for the President. Scott hypotheses that his break up may in part have resulted from his liberal politics. Scott’s wife’s loss would become Petworth’s gain.

I asked Scott how he heard about Temperance. It turns out some of his friends had told him about this bar and he thought he would be a perfect fit. And the rest as the say is history. When asked how long he sees himself working at Temperance, Scott replied without hesitation “for as long as I’m in DC, I’m a lifer!”

Scott has worked at numerous bars all over the city including such high end joints like Inde Blue and Charlie Palmers. So I asked him what are the differences at working at Temperance. “It really is 180 degrees different”, he said “A lot of bars in the city rely on students and Capitol Hill but we are a neighborhood bar and we are proud to have such a loyal fan base.”

“We are not a sociological experiment”

When I asked Scott about what it is like working in a bar in a neighborhood where a lot of development is occurring he bristled. “Every time we get a review they always talk about the sociological experiment and we are getting kind of sick of it”, he said. He continued “We want to be accepted by everyone, we don’t have any ulterior motives, we are just a business, I’m here to make drinks and make people happy. We really do embrace the whole neighborhood, and thankfully, the neighborhood embraces us.” He continued, “We hope Temperance Hall is a true mix of he neighborhood and we think we are successful in that respect”.

“It makes me happy that people come up to me almost every night and tell me that they love the music and they love the juke box.”

I asked Scott if he has any secret in picking the music he plays. Scott says the secret is the eclecticism and quality of the music on the juke box. You could see Scott’s eyes light up as we began talking about the music he likes. “It is one of the true pleasures in life” he explains. When pressed to name his favorites he replied “Alt. Country , 50s/60s jazz and 60s soul”. “It is all represented in the juke box, you’ll find Johnny Cash, Wilco the OJs and Johnny Watson.” Well I didn’t know who Johnny Watson and the OJs were but I assume that is pretty eclectic!

“It is very easy to make friends here in Petworth”

I asked Scott, besides the bar, what else did he like about Petworth. He cited the yards and the ability to make friends here.

I concluded the interview by asking Scott about what are the most popular drinks he serves. Scott says that the beers chosen vary from night to night. Some nights they sell many drafts and other nights the sell PBR or Bud. He did not the unusual amount of Peroni beer that is sold as well.

But Scott explained that Temperance is a Whiskey Bar and as such they sell a lot of whiskey as well. Scott tries to share his knowledge of the complexities of the various whiskeys with the patrons. For your next visit, a popular one is a Rye Whiskey called Michters US1 American Whiskey. Scott believes its popularity is largely in part to the bold chocolate flavors noticeable in this whiskey.

When he thought a little bit more about the popular drinks, he remembered that they sell a lot of Jameson as well. He concluded, “who knew Petworth would love Irish Whiskey?”

Well, whether you like beer or whiskey or Alt. Country or 60s Soul, next time you go to Temperance you always have a good possibility of experiencing both when Scott is tending bar.