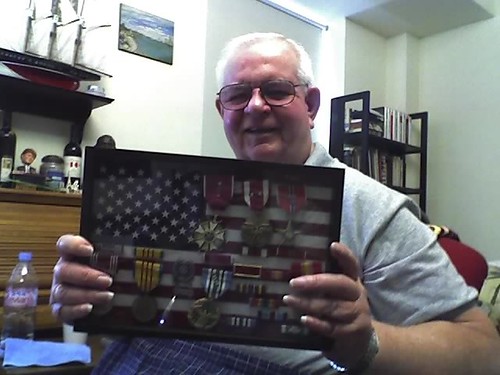 Allow me to introduce Master Sergeant (Ret.) Gary Rice. MstSgt Rice was nice enough to donate hundreds of books to the Petworth library. (Ed note: unfortunately the library was unable to put them in its stacks but they are available for free when you walk into the library.) Fortunately, when I went over to collect the books I also had the opportunity to sit and talk with MstSgt Rice about his experiences in the U.S. Army. I believe that we too easily forget the sacrifices these sailors, soldiers, airmen and marines have made for our country. It is my hope that this new feature will remind people about our neighbors in the Armed Forces Retirement Home who have lived extraordinary lives often with little or no recognition. Let’s not get into the politics of war, rather, let us appreciate the fascinating lives these men and women have lived.

“It Started With Nike Hercules Missiles”

Originally from Huntington, West Virgina, MstSgt Rice was drafted into the US Army at the age of 24 in 1962. He had just finished a Masters Degree at the University of Kentucky and had run out of deferments. His first duty station was working with Nike Hercules Missiles where he served as a missile launcher crewman. He was stationed in this capacity for 18 months before going to another missile outfit in Germany for another six months.

After four months back in the States Rice was ordered back to Vietnam in 1967 for another tour assigned to the training directorate.

“I was ready to go back to Vietnam”

However, in 1968 Rice was sent back to the States to attend the Foreign Service Institute in Arlington. Rice had already picked up Vietnamese in his two previous tours, so while at the Foreign Service Institute, Rice was trained in Human Intelligence (HumInt). In 1968 the riots hit Washington DC and Rice was assigned to Task Force Washington. For April and May of 1968 Rice patrolled Washington in a jeep with three other guys. They patrolled from 2nd and T SW to 14 St. NW. He saw lots of burning and looting but he was unable to do anything about it as he and his men were unarmed. (This would be an experience repeated in the most unlikeliness of places.) When I asked him what this experience was like in DC after serving two tours in Vietnam, Rice replied “I was ready to go back to Vietnam.”

“The thing you had to watch out for were mines.”

After the Tet Offensive Rice was sent back to the Training Directorate in Saigon. In Saigon, he explained, the greatest danger were mines that were often put on bicycles that “could blow you away.” Rice was staying at a hotel in Saigon when the North Vietnamese drove a Lambrda (like a three wheeled golf cart) into the lobby of his hotel. There was a huge explosion and two MPs were killed. Rice was able to pull a mattress over his head and escaped unharmed. In the very next hotel he moved into there was a great explosion that he avoided by leaving five minutes earlier for his post. Additionally, Rice recounted the numerous grenades and incendiaries that were thrown at US troops.

After the Training Directorate, Rice was put in charge of offshore training. In this capacity Rice selected Vietnamese and Cambodian army officials who would train in the United States. At this time he would spend two weeks in Vietnam and two weeks in Cambodia running this program. This work continued until Dec. 1970.

“We took a picture of 450 North Vietnamese Prisoners we were holding and gave it to Jane Fonda on her way to North Vietnam.”

Rice explained that at this time he was simply notified that he would be going on an assignment where he couldn’t wear a uniform or any identifying insignia. He was informed that this assignment would be known as Project 404. Project 404 was so secret, that Rice wouldn’t speak about his experiences until 20 years after the mission was completed.

“On the day I left Saigon all I had was a passport that said I was in support of US operations,” Rice explained. Initially he joined the US military advisory group in Bangkok. But when he reported for duty nobody knew where he was supposed to go. So finally one night he was talking to a guy at the bar of the Windsor Hotel who knew exactly where he should be. It turned out the guy was a pilot for Air America. He met the pilot the next morning and they flew to Northern Thailand where he was able to meet up with the operations people. They then informed him that the next morning at 0600 he would be going to Laos.

In Laos Rice was charged with 10 folks and one Air America Plane. Here he was responsible for training the Laotian Army. Working with Laotian HumInt, Rice collected information on Vietnamese troop movements. Additionally, he and his group would also “draw boxes” for B-52s to strike the Ho Chi Minh Trail. On top of that Rice was also involved with psychological warfare which mainly consisted of dropping leaflets over the northern parts of Laos. While working on PsyOps Rice talked with over 450 North Vietnamese soldiers that the US was holding prisoner. The North Vietnamese would not admit that these soldiers were being held in Laos. So Rice passed a photograph of the soldiers as well as letters they had written to Jane Fonda who was on her way to North Vietnam. The North Vietnamese refused to accept the photograph or letters.

“My Pilot had a .45 so he ended up shooting the guy who put a machete through my ankle.”

“You go out to places along the Ho Chi Minh trail and there were holes in the ground that soldiers would jump out of and attack us,” explained Rice of the dangers he faced in Laos. Rice continued, “One time I was shot in the left leg and had a machete go almost completely through my ankle when soldiers came out of one these holes.” Rice, being dressed in civilian clothes was not permitted to carry a weapon. But his Air America pilot was allowed to carry a .45 pistol. His pilot shot his attacker and dragged Rice backed to the plane before other soldiers could arrive. Rice was taken to a hospital in the Philippines were he recovered for six weeks. Rice never received a Purple Heart for that injury because his mission was not officially recognized at the time.

Rice has no idea how he was selected for this mission. But he said you “never knew what was going to happen.” He served on this mission until 1973 often working 18 hour days, without the protection of a personal weapon or uniform and not once in that three years was he permitted a trip back to the US.

The experiences recounted here are obviously barely the tip of the icebe
rg. I’d like to thank MstSgt. Rice for the generous amount of time he spent with me and I look forward to learning more about his experiences.