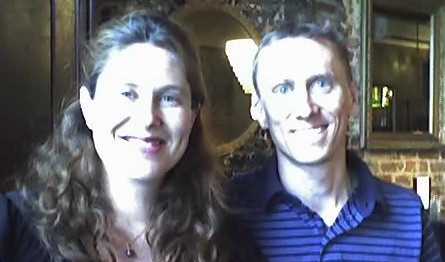 Karen and Steve, originally uploaded by Prince of Petworth.

Yesterday I sat down with with Karen and Steve who are expecting their first child in August. Steve, 38, an IT specialist for a government agency, moved to Petworth one year ago. He had been living in Dupont Circle for the past six years and decided to buy a house with his sister. After looking in Shaw, Brookland and Columbia Heights Steve ended up buying in Petworth because “Brookland wasn’t city enough and Shaw was a bit too expensive.” Karen, 38, a science writer and Pilates instructor, of course was consulted and added that “we liked how close it was to the metro, how close it was to the park (old soldier’s home) and liked the diversity as well.” Karen said, “I walked around and it was neighborly, everyone was very friendly.” It also didn’t hurt that “the house was completely redone and beautiful inside.”

Karen went into greater detail about her love of Petworth. “I love the neighborliness and the fact that there are so many babies and toddlers on the block, all the parents say hi and offer helpful suggestions to me when they see that I am pregnant. In the 12 years I lived in Woodley Park there was nowhere near the amount of neighborliness that there is here.” Karen also likes the diversity found in Petworth. “You don’t see this much diversity and harmony too often in DC”, she remarked.

Steve also likes the fact that Petworth is still very much a part of the city. He likes the urban feel combined with the neighborly feel. He also likes the fact that Georgia Avenue is such a vibrant street and he is excited about all the revitalization going on. Of course Steve and Karen were big fans of Temperance Hall (that is where we met for the interview.) Most of all both Steve and Karen would love to see a really good bakery come to the neighborhood.

When the baby arrives both Karen and Steve believe that Day Care is a very viable option in Petworth. They like the fact that there are so many day care options as well as not having to worry about booking them a year in advance. Karen also added excitedly, “and there is playground nearby!”.

If all goes well when the baby reaches school age Karen and Steve would like to send him/her (they didn’t find out the sex of the baby) to a Math and Science Charter school that is moving to Petworth. Unfortunately, this Charter school has such a good reputation that you have to win a lottery to have your child attend. Karen and Steve don’t believe that DC public schools will provide the best education. They joke that if they don’t win the lottery to the Math and Science Charter School they may start their own.

Five years from now Karen and Steve may have more children thus requiring them to find a bigger house. They’d like to stay in the neighborhood but if that is not possible they will seek to stay in the “general vicinity.” In five years they hope that Petworth will remain a diverse and dynamic community with more commercial options. But they hope it retains the neighborhood feeling that attracted them to Petworth in the first place.