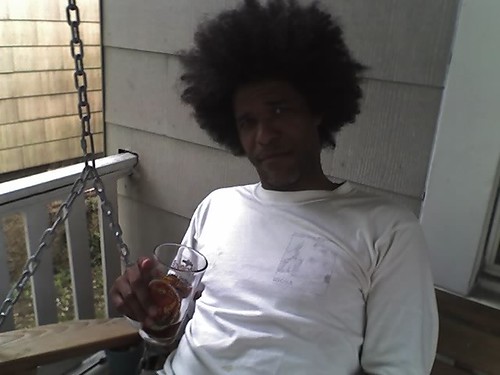 Joe Mills exudes cool. He is the type of guy who lives the lifestyle that many people envy. He lives by his own rules. You may have seen Joe in his latest play “The Championship Season” or he may have even poured you a pint at Domku, or you may have seen him walking around town with his beautiful wife Anna and genius daughter Renata. Joe definitely sticks out in a crowd for all the right reasons.

Joe identifies himself as a theater artist. He recently finished starring in The Championship Season by Jason Miller. The Washington Post’s review said “The best performance comes from Joseph A. Mills, III, who [stars] as cynical alcoholic Tom…Mill’s slouching casualness makes an intriguing oracular presence of this wisecracking character… ” Not too bad to be given best performance status by the Washington Post.

Joe attended Georgia Southern College where he was first introduced to theater. His freshman year dorm happened to be right next to the school theater and one day he was following a cute girl from Nebraska who walked straight into the theater. The lure of a cute girl was not strong enough to get him acting that day. But later in the year Joe took an acting class as an elective and for extra credit he could perform in a student play. So on a lark one day after rugby practice Joe decided to get his extra credit points and as luck would have it the cute girl from Nebraska was there to provide Joe with a little extra incentive. Joe got the part in ‘Crossing Niagra’ primarily because they needed someone strong enough to carry a guy on his shoulders for three quarters of the play. While in ‘Crossing Niagra’ Joe was introduced to a lot of cool people in the theater department. This experience led Joe to audition for the major school play ‘Who’s Afraid of Virginia Wolfe’ where he landed the role of Nick. And the rest as they say is history.

I asked Joe what was his most memorable acting experience of the many plays he has been in. He is most proud of ‘Fathers and Sons’ by Brian Freil where he played the Father, Nikolai Petrovich Kirsanov. He cites this play because the character was so different from him that he was required to use the famous Checkov technique. The Checkov method has many components that include: the feeling of ease, the feeling of form, the feeling of beauty, the feeling of the whole, psychological gesture, imagination, concentration, improvisation, and imaginary body among others. I didn’t really understand the description but Joe had such passion talking about it I wasn’t surprised to learn that he is now teaching the method.

But back to Georgia Southern. In Joe’s sophomore year he was unable to play football anymore (he was a linebacker) so he decided to join the United States Marine Corps reserves to pay for school. Joe describes the experience as an enlightening one. He enjoyed the physical challenges and the camaraderie the Corps provided. Unfortunately due to a back injury that should have prevented him from enlisting in the first place was discovered and he was discharged as a Lance Corporal.

After college Joe was a bike courier for 10 years in DC and New York. Being a bike courier allowed him the flexibility to pursue his acting. Similarly, that is how Joe discovered bar tending. He needed a job that provided him this flexibility. Joe happened to be sitting in Domku when he heard Kiera talking on the phone about needing a bartender and voila Joe got the job. Previously Joe had been a bar tender in Bedrock Billiards in Adams Morgan.

Before moving to Petworth Joe had lived in Mt. Pleasant and Columbia Heights but finally settled in Petworth in 2001. Joe wanted to get married and needed a place to move into with Anna. The house that he found in Petworth fit all the criteria. Anna wanted to be close enough to Rock Creek Park and have a back yard and Joe wanted to make sure the house was detached. When asked why, Joe replies deadpan “because I’m a musician.” Yes Joe is a musician as well. He is currently recording an album and he play the bass guitar and drums and is bringing in musicians for the project. Back to Petworth.

Joe knew nothing about the neighborhood before moving in. But he immediately loved it and his house. Joe explained that when he shows people a picture of the house they don’t believe it is in the city. When pressed about what he loves about Petworth, Joe immediately mentions Grant Circle. “I really love Grant Circle and the tree in the center, that tree just rocks, winter, summer, spring and fall and it is a great place to take my daughter to run around and fly a kite.” he explains with his eyes ablaze with excitement at the mere thought. Joe also loves the fact that we are close enough to Howard University that on some days we can hear the marching band practice.

Joe would love to see a movie theater and all types of new restaurants in Petworth. Joe is excited that a Yes! Organic Market is coming to Georgia Avenue. He explains “it only adds to the livability of the community without having to drive to do these things. You just love where you live because everything is here.” Since moving to Petworth, Joe hardly goes to Adam’s Morgan anymore because Petworth is starting to see its own venues emerge such as Temperance Hall and Domku that allows Joe the comfort of staying in his own neighborhood.

Joe summed up his thoughts on Petworth: “I don’t think we will ever leave Petworth, we will never sell our house, I love that house, We are in Petworth for the long haul.”

It was a pleasure to introduce you to Joe Mills: Theater activist, father, husband, musician, bar tender, former Marine, former courier, and all around cool cat.