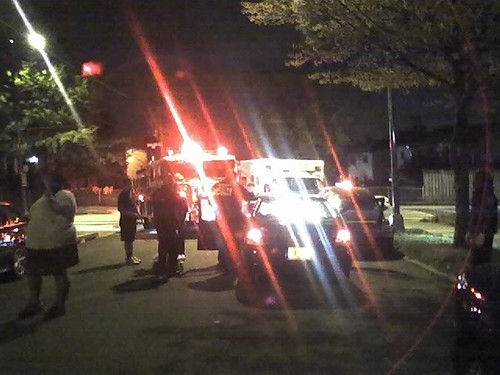 At approximately 11:00 p.m. Tuesday evening an apparent drunk driver came barreling down 4th St, NW the wrong way on a one way street and smashed into two cars. It appears no one was hurt although there was extensive damage done to one car and minor damage to another. Apparent drunk driver driving the wrong way on a one way street, it’s a miracle nobody was seriously hurt. The car ended up on the corner of 4th and Taylor NW after the driver apparently blew his engine trying to flee the scene. I’m telling you when the temperature reaches 80 degrees crazy things start happening. Again, thank God no one was hurt.

One fire truck, one amblance, one police cruiser and many responders were on the scene within minutes to their credit. And another thing that makes Petworth great: the neighbors resonded in full force. Almost no one on the block remained in their homes. Everyone came outside to make sure no one was hurt and to support those whose cars were damaged. Petworth is by far one of the most cohesive neighborhoods I have ever lived in especially in times of trouble. Everyone is always looking out for their neighbors.

more stories
Previous
1984 or a good thing?
Next
Remember when Balkan had a negative connotation