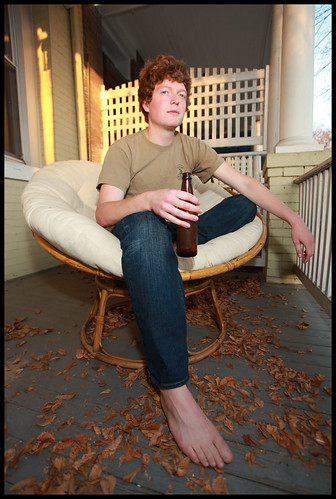 Ed. Note:  Danny sends me these great stories directly, they are not hand selected by me.

“I grew up outside of Burlington, Vermont. When I was 19, I tried to convince my Dad to let me use his home beer brewing kit, but he said I was too young. Then, when I was 20, I bugged him again and he finally took it out and we brewed a brown ale together. In college, I grew to like beer more and brewed a new batch every couple of months for me and my friends. But, I really fell in love with beer when I moved to DC.

“I bought equipment down here and started making regular batches. DC is a political place and I like to make theme beers. You know, beer names are full of puns, that is why people like beer so much. I wanted to throw an election party and brew a cleverly named, themed beer. Four or five months before the election, which is probably more time than I spent preparing anything, including my senior thesis at college, I created the Audacity of Hops. I used victory malt and progress hops and coffee from Hawaii, Kenya, and Indonesia, which are Obama’s three homelands. It was 8% alcohol and made of half-light and half-dark malt. It was a very thought-out process. The election came and the party went over really well. People loved it and The City Paper even wrote about it. You know, I didn’t have a contingency plan had McCain won. I could have made a McCain beer I guess, but it would have been bitter, old, and dusty!

“For inauguration, I had another party and made 200 numbered Audacity of Hops beers. That was the most beers I had ever made in my life. I even kept a bottle of Audacity of Hops for the President. It is numbered 50 for the great State of Hawaii. I have tried to get it to him on a number of occasions, but I don’t know if it’s going to happen. But, if the President every wants it, even when he is no longer the President and just some dude living down the street and he wants to have a beer, it will always be waiting for him.

“Seeing and being involved with the beer culture in this city got me thinking about starting a brewery. One of my biggest questions is why there is not a real functioning DC microbrewery. Other major cities have multiple local breweries. Seeing the success of the Audacity of Hops and the success of my regular beer-tasting nights with friends, it is clear that people love beer here. But, the most local brew you can get here is from Delaware and Virginia.

“It has been 25 years since there was a microbrewery in the area. Before the Kennedy Center was built, that land once belonged to the Heurich brewery, built by a German immigrant in the 19th century. But, sometime in the 50’s or 60’s, he started contract brewing up in New York. That was really the last bottling brewery in DC. I would love to buy a DC beer that is brewed with DC water and takes pride in being from DC.”