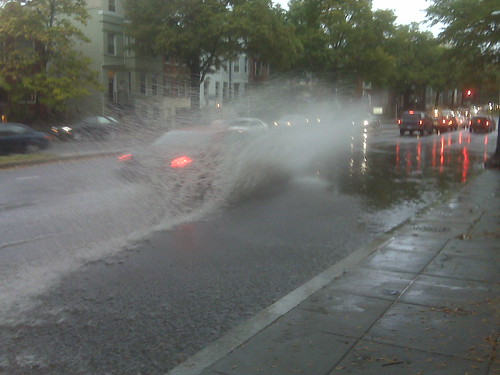 I don’t know if anybody outside the neighborhood has seen this, but there is some serious flooding happening on Rhode Island Ave NW, about ten to twenty feet before 1st St. in front of the dry cleaner’s. This picture is from yesterday, but when I walked outside today the puddle had overtaken the entire street. Cars were going through the water at less than 5mph, creating a bit of a traffic jam. Any idea if this is some sort of sewage/drainage problem? Or is this a normal occurrence in Bloomingdale?”

I’ve seen this scene in many neighborhoods around DC. I’m fairly certain it is caused by clogged sewage drains. You can report a problem here or just call 202-612-3400. Anyone else note some flooding around town?