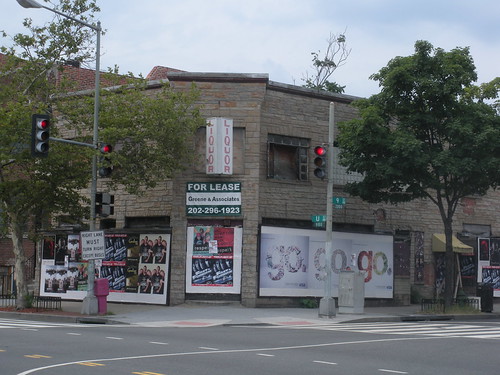 Here are some details on that building you spoke about @ http://www.princeofpetworth.com/2009/09/prime-corner-property-at-9th-and-u-streets-nw-slated-to-become-a-tavern/

Mr. Hilton said he handles operations at Restaurant Marvin and the Gibson. He and his brother have been very interested in the building at 901 U Street NW and very saddened by its deteriorating condition. They succeeded in contacting the building owner and are now planning to establish a gastropub in the building. They would have a very substantial food component, similar to Restaurant Marvin. They want to have a roof deck. They have already hired PolySonic, a company that will help them make sure they do not repeat mistakes of the past regarding noise. They propose to have ambient music from speakers, similar to Bouche, and will be very careful about monitoring volume. They are applying for a C-T license but do not yet know the exact percentages. They plan to be very active with the neighborhood and are asking for the Commission’s support. He has been talking with Commissioner Raia for about a month while working on acquiring the building. He said that renovation would take a very long time. The building is in very bad shape. They have some conceptual drawings and must work with Steve Calcott at the Historic Preservation Review Board, which they are happy to do. They want to restore the building and make it a destination on the block.

Commissioner Moss asked if they planned to brew beer on-site.

Mr. Hilton said they would not do that, as it requires very expensive equipment. He said a gastropub is an English pub where food is a major component. The closes example he could think of was Commonwealth on Irving Street in Columbia Heights. The name Brixton comes from a neighborhood in East London, England, very similar to the neighborhood around 9th and U Streets.

Commissioner Smith asked what kind of food would be served.

Mr. Hilton said the menu would include fish and chips. The menu price point will be reasonably low. The kitchen will operate until closing. Burgers, fries and food typical of a London pub will be featured. He added that they would enter into a voluntary agreement.

Chairperson Nadeau asked for questions from the community.

Mr. Tom Matha asked how large would the restaurant be.

Commissioner Raia said that he had been talking with Mr. Hilton and expected to speak with the WNA. Since they are a new restaurant, setting a specific food component in the voluntary agreement is not possible. They will wait six months or a year to see how the business develops before setting the food component of the agreement.

The motion was adopted unanimously, 9-0.