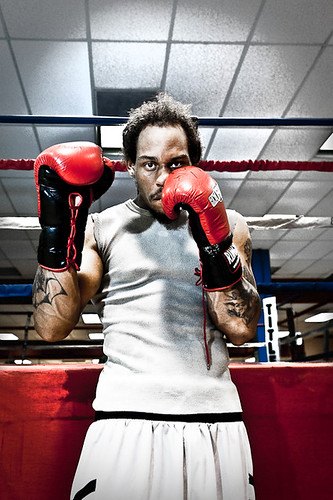 Alexander ‘The Great” Johnson is pictured at the Sugar Ray Leonard Gym in Palmer Park, Maryland a week before his September 26th fight.

It’s September 26th, the night of Alexander “The Great” Johnson’s seventh fight as a professional boxer (see part one and part two), and he couldn’t be any more relaxed. With his record at 6-0, including 3 knock outs, he’s in peak physical condition, which probably goes a long way in explaining his composure: he’s supine on a sofa, his fingers laced behind his head, nodding gently to the tunes in his headphones. 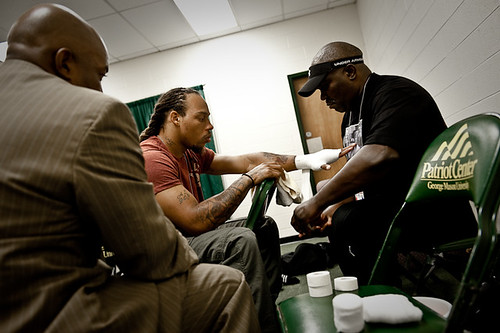 Al’s trainer Zeke tapes up his hands in the locker room before his fight at the George Mason Patriot Center.

It occurs to me that he may be more comfortable in the ring than anywhere else. This is, after all, the guy whose favorite tattoo reads “Keep your friends close and your enemies closer.” But he’s not in the ring yet.

The locker room at the Patriot Center at George Mason University has a cautious, almost sacrosanct air to it. Few words are exchanged. As the fight draws near, it becomes charged with an energy stirred by the silence. Al’s trainer Zeke tapes up his hands and runs him through some exercises as his manager, Diana, makes sure everything runs smoothly. The third fight in the line-up ends early with a first round knock out; Al’s fight is up next. 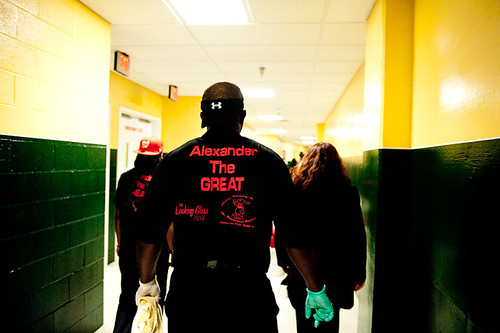 Al’s team walks out to the ring at the Patriot Center to the tune of ‘Run This Town’ off the new Jay-Z album.

Zeke rounds up the team and walks with Al through the backstage maze and out of the tunnel. ‘Run This Town’ from the new Jay-Z album thumps as Al enters the ring. It’s show time. He does a few stretches, listens to Zeke’s advice, and knocks gloves with his opponent. Then it’s on. 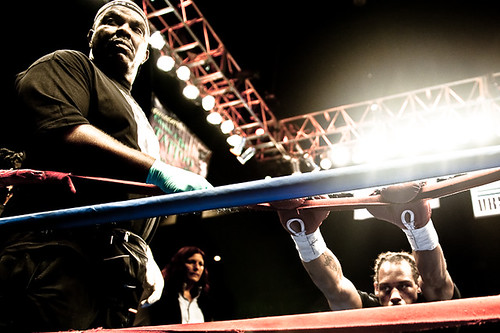 Al stretches in the ring moments before his seventh fight. His trainer Zeke is pictured top left.

It soon becomes clear that Al is spending more of his time on offense than his opponent, the tenacious Francois Ambang. Notorious for fighting hard until the bitter end, Ambang is nevertheless against the ropes with Al more often than he’d like to be. The fight begins to resemble a game of cat-and-mouse with Al playing the role of predator. Still, Ambang persists, and the outcome has its moments of ambiguity. 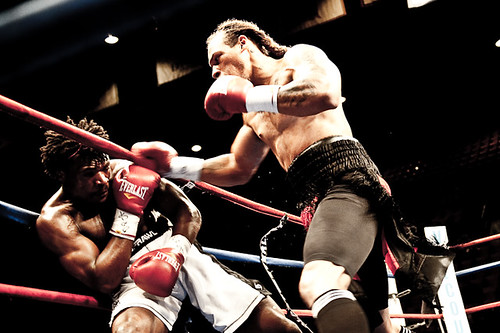 Al gets his opponent Francois “The African Warrior” Ambang against the ropes.

At last, after four rounds, Johnson and Ambang retire to their corners. The judgment is swift: Alexander “The Great” Johnson wins by unanimous decision. His record is 7-0, and he’s finally talking again. 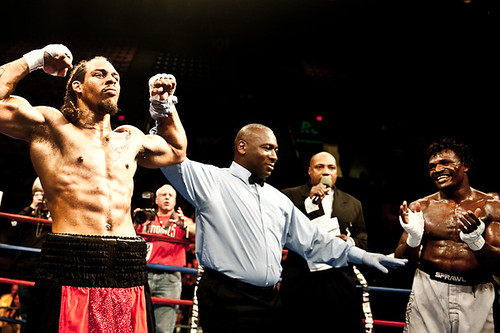 I ask him how it feels to be undefeated. “You’ve got to have something to prove in this game,” he responds. “My trainer is outstanding. So is my manager. I’ve come far.”

Indeed, this native son of northeast DC has come a long way from his ambivalent youth to his position as a father and title fighter-in-waiting. 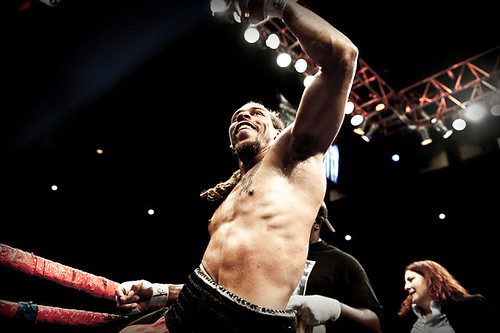 Al gives a shout out to his fans at the Patriot Center in Fairfax, Virginia.

Asked about next steps, he says, “I’ve got to get my name out there now.” He pauses as a grin envelops his face. “I’ve got to put some butts in those seats!”