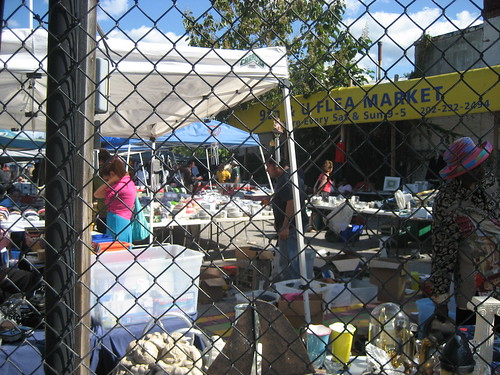 The great publication DC North has some great articles this month. But one that really jumped out at me was their scoop on the U Street Flea Market, located at 9th and U, development plans. They report:

“Per an application for Federal Low Income Housing Tax Credits filed with the District’s Department of Housing and Community Development (DHCD) in July, the Jazz will bring some 153,770 square feet of new apartments and retail to the current site of Shaw’s U Street Flea Market. In total, WMATA owns three separate properties between Seventh and Ninth streets on the north side of Florida Avenue, totaling nearly 29,000 square feet, above the Green Line tunnel linking the Howard-Shaw and U Street-Cardozo stations.”

Sadly, the online version doesn’t have a photo of the rendering so be sure to pick up a paper copy outside the metro for that.

This section of U Street is on fire. First we learned of Dickson Wine Bar coming to 903 U Street, then we recently learned about the the tavern coming to the corner of 9th and U with rumors of Marvin/Gibson involvement. And now this.

I suspect some folks may miss the Flea Market. Even though I almost got my ass kicked for taking photos there, I do kinda dig it and it does seem to be a popular spot. The DC North article also says that there will be “three public, open-air plazas along Eight Street, Ninth Street and Florida Avenue” so perhaps those plazas can absorb some of the market.