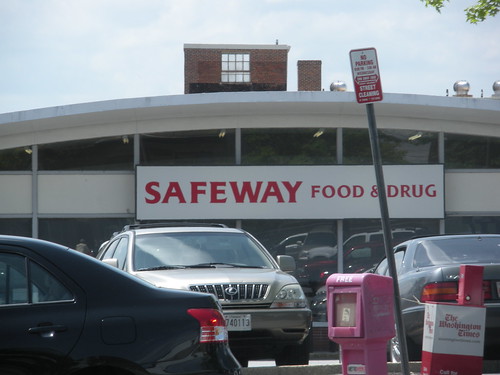 I’ve been kicking around this idea for a while now, that I would talk about how and why I’m still a dedicated Safeway shopper, even though Harris Teeter came to town. I had all of these noble (“Harris Teeter prevents its employees from unionizing!” “The prices – the prices! Just across the river at the VA HT’s everything’s 30 cents less!”) and not so noble (“The HT after work is full of the kind of psuedo-food snobbery that I fully admit to participating in, and frankly, I’m unemployed and want to grocery shop in my sweats and not have to bump into my fancy employed professional acquaintances with a cart full of ramen.”) reasons that I was going to outline and declare my undying devotion to the Safeway Formerly Known as the Unsafeway. I was… I really, really was.

But lately I have to admit… I’ve been fervently cheating on Safeway with the new kid in town. It started innocently enough around the holidays. HT has some swankier goods, and it was just one time. I kept coming back to Safeway to do my weekly “big shop” though. With all the time on my hands though, I started cooking for myself more and more and getting back in the kitchen, happy to have time to pursue one of my favorite hobbies. I’d go to Safeway, and they just wouldn’t always have what I needed. Slowly but surely, it made less and less sense to even bother with Safeway, since I knew I’d have to make two trips anyway. (Not to mention the trips to Balducci’s and Dean & Deluca for the occasional treat or far flung ingredient. I am happy to report I haven’t set foot in a Whole Foods in at least 6 months, but that’s a whole different, irrational issue.) Then Lent rolled around, and the Harris Teeter seafood department is truly far better than my dear old Safeway’s, and so every Friday I’d hit the HT to see what was on sale, or to pick up their passable sushi. Since Easter, I’ve been really lazy what with Spring sort of, kind of teasing it’s way out, so I’ve been all about the (exorbitantly priced) salad bar at the Teet. And that brings us to today…

I have desperately needed to go grocery shopping for a couple of weeks now. And as I was gathering up my things and getting ready to go, I never even considered my old friend the Safeway. And I realized that I’m one of those people. Those people who dump the old reliable when the new and shiny comes to town. I have shopped at the Safeway for 7 years. The staff was no longer surly to me. I’d seen it transformed from the Unsafeway into a real, live, modern grocery store complete with a Starbucks, an olive bar and a decent produce section. (Once, many years ago, I went to the Safeway on a Sunday morning looking for tomato juice for bloodies. They had none. What the fuck, I thought. Now, I can get a variety of tomato-based juices, including my preferred Clamato.) Continues after the jump

I’ve never claimed to hate gentrification, or yuppies, or any of that stuff. In fact, I quite like those things. I like that I live in a neighborhood that, had my mother ever visited me she would have called “cute” and where I feel safe walking my dog alone past 11pm, and where all of my neighbors are doing the same. I was thrilled when the Safeway remodeled and upgraded, and sure, it was a little more expensive than it had been, but it was so, so worth it. But I’d stuck with the Safeway through thick and thin, and even when it seemed like everyone else in the neighborhood abandoned the Safeway for the Teet, I stuck with it. I’d made do for many years, I sort of had relationships with the employees (okay, they’re cordial – but that took A LOT of work), I knew where everything was and I understood the layout. The Safeway was MY store.

The Harris Teeter has lovely lighting. The Harris Teeter has been my devoted supplier in something I’m calling the Great Box Wine Experiment of Aught Nine. The Harris Teeter has a better selection of goat cheese than Safeway. And a superior selection of prepared foods. It’s arguably a better all around shopping experience, and yet, I feel so, so guilty shopping there. Not because its workers aren’t allowed to organize (truth be told… I don’t care that much, but please don’t tell that to my friends who work for organized labor), not because the prices are so high that it obviously only caters to the more affluent in the neighborhood, none of these things are the source of my angst. It’s the startling lack of loyalty that I am displaying by abandoning my Safeway. I consider myself to have a good deal of “sticktoitiveness” when it comes to my friends, and I considered Safeway my friend, and now… well, I’m trading her in for a younger, hotter model. What’s next? A red corvette convertible?

But so it goes. Neighborhoods change and grow, and we change and grow with them. Choices are good, and the addition of Harris Teeter to the neighborhood is a good thing for all of us, including the Safeway. There’s room in my life for both of these stores. AND the Florida Ave. Market AND the H St. Farmers Market AND Eastern Market. I know that I’ll always identify first as a Safeway shopper, and I look forward to watching my friend get even better now that she has a little competition. And there are things HT can never give me. (Like for instance, those delicious little frozen appetizers called Bags of Gold. I LOVE those things.) But, I’ll always feel a little sad on the days that I drive past my old friend to pay a visit to my new friend.

So, my question for you is: How do you incorporate the new and the old? Do you immediately abandon your old haunts for newer ones? How much of an effect does nostalgia have? Or work put in to develop a relationship? When you watch your neighborhood change and grow before your eyes, how do you participate in that process? (I don’t mean in terms of gentrification – that’s really not what this is about, nor is this intended to stir up that conversation for the millionth time.) Do you maybe miss out on new things because of your loyalty to the old?