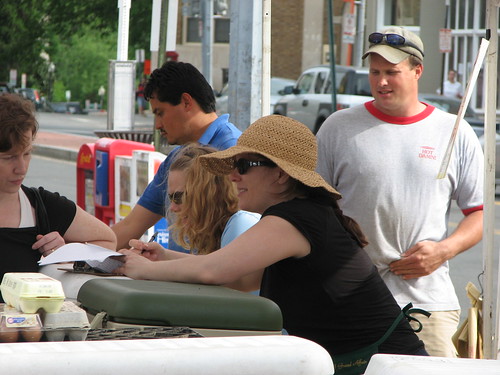 The following was written by PoP contributor Charles.

Farm stands reflect their owners. And so, if you met Bryan Kerney – possibly while fishing on the Bay or sipping something from a mason jar on a back porch – you’d guess as soon as you strode into the Mt. Pleasant or U Street markets that the stand with massive coolers filled with pork slabs and beef to the right, and fresh produce sprawling to the left – not arrayed like organic folk art, but heaped –was probably his.

Bryan looks like the antithesis of the earnest locavores you’ve seen espousing the importance of wormy organic corn or the wonders of kale. He looks like there’s something in his cup besides coffee and the party’s just getting started. Which is somewhat misleading: his meat is free range; his farm is transitioning to organic; and, if he gets started, he can bend your ear plenty about the beauty of a fresh picked heirloom tomato. Only, with Brian you always remember it’s not about the carbon footprint or evil agribusiness, it’s about how damn good the things taste.  Continues after the jump. 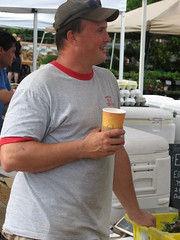 He started as a kid working nights and weekends on the farms and stands near Lancaster, Pennsylvania. After moving to Maryland and working the Baltimore market, he went off to study computer science before, having found that a little sterile, he decided to become an electrician before, realizing he “can’t stand being inside,” he decide he’d go back to the land. Land being expensive, he also had the good sense to marry a girl whose family had some, Kristin, and set they set out to grow hay and grain together – an operation that has since expanded to include several rented parcels, a variety of produce and a number of tasty animals, as well.

I got to know Bryan (and Kristin, who is a force in her own right but is taking this summer easy in anticipation of kid number three) mainly because of his pork – chops, loins, butts, all of which taste gloriously like pig and not some leathery, lame-ass “other white meat.” I am polishing off some baby backs my wife cooked up as I type, and I can never go back to Safeway again. He’s got beef, mostly grass-fed, but finished with grain to give it a more unctuous texture and taste. Chickens, too, sometimes. And once I bought a whole baby pig from him, which a friend and I roasted on a spit, which I think should become a PoP summer tradition. So he’s not only custom butcher to restaurants — including Policy on 14th and T — but to you (Bryan, don’t forget my pig skin Saturday!).

And, while he comes off as a meat-and-potatoes guy, he does have a way with produce, particularly strawberries – already out and excellent – tomatoes and weird psychedelic cauliflowers. 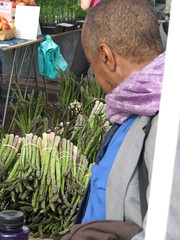 The engineer abides, though, whether it’s in the grim humor he finds in fixing, repeatedly, a recalcitrant “shit-spreader,” or building his own 800-gallon boiler and running pipes under the plant beds to stave off late-season frosts. He seems to enjoy the varied and relentless challenges of farming as opposed to, one supposes, installing recessed lighting in a Grant Circle condominium. When he says “as soon as I figure it out, they either change equipment on me, or mother nature changes something” it’s doesn’t sound like a complaint so much as a brag.

Truck Patch is currently selling at Mt. Pleasant and U Street, and hopes to return to Bloomingdale, where impending motherhood and loss of a trusted employee left them short-handed. They are also at Baltimore’s Party Under the JFX on Sunday mornings, if you find yourself in Charm City. 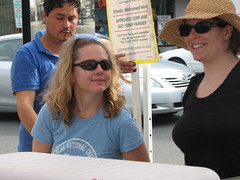 Speaking of Bloomingdale, I had a brief e-mail exchange with Bloomingdale (and U Street) Market Manager Robin Shuster and she diplomatically dismissed the idea of any larger issues with the neighborhood: “everyone should calm down…[It’s] Just a few people with parking issues that everyone is working together to solve.” She was grateful that 800 people had shown their support by signing the Big Bear Petition (which has a ring to it, like “Mayflower Compact” or “Treaty of Guadaloupe-Hidalgo”) and, getting all practical, reminded me that “we finally are having a week of sunny, warm MAY weather so that the farmers will have more for everyone’s Memorial Day picnics and barbecues.”