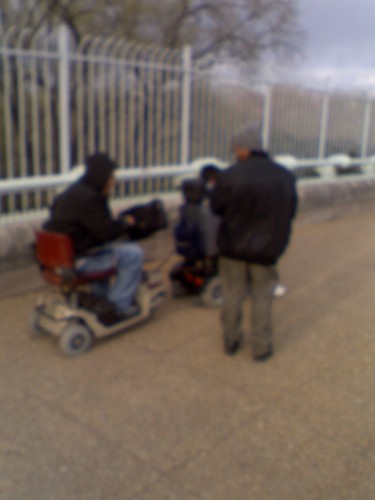 A few weeks ago I was walking to work through Pierce Park and saw the three guys in the picture, seemingly between permanent housing and a little tipsy, engaged in a semi-serious lesson in the use of numchucks. Not a typical sight on the walk to work and it really made the rest of my day. The guy who had put himself in charge of giving the lessons was clearly not an expert. He was concentrating hard just to get the numchucks to fly around his shoulders a few times without hitting his face. I really wanted to get my phone out and take a picture, but was afraid of the potential consequences given their activity. I think I could have outrun them if necessary, but having to tell the story of how I had gotten numchucked by three homeless dudes wasn’t something I wanted to risk.

I almost thought it was all a dream when, tonight, I was walking home from work and these guys were crossing the Duke Ellington bridge on their way toward the park. The picture really doesn’t do it justice, but these guys had gotten a hold of two busted Rascal type mobility chairs. One of the chairs was broken down so it was being towed by the other. I may have witnessed the first Rascal to Rascal tow. The chair in back was tied to the one in front with what looked like a long shoe string. It was actually working pretty well for them.

As I got closer I could see that they were having a great time towing the Rascals back to who knows where. Seeing as they were in a good mood, were at least implying a preference against serious efforts of mobility, and didn’t the numchucks out, I felt safe enough to snap a shot this time. Clearly, I still wasn’t comfortable enough to draw attention to myself by standing still to take the picture, but I think the scene comes across.

Not sure if they know that teaching numchuck lessons without qualification or a care in the world and Rascal riding are on my bucket list. I can’t wait to see what they come up with next.