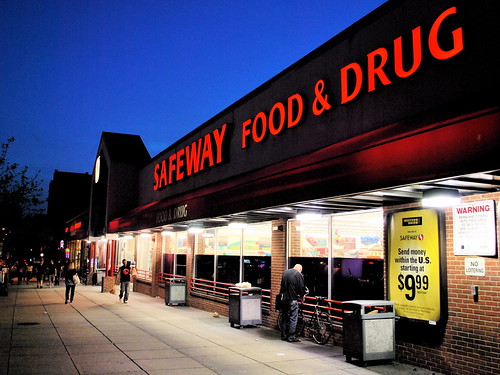 Thanks to a reader for sending this DC Mud article with an update on the Social Safeway (1855 Wisconsin Ave, NW) as well as a small update on what they call the “Not So Safeway” in Adams Morgan (which the reader calls the Salvadorian Safeway):

In the meantime, renovation procedures take a much more low-key tact at the “Not So Safeway” at 1747 Columbia Road, NW. That store will remain open when it goes under the knife (as early as early next month) and, although the store will forgo demolition, the end result will be much the same as in Georgetown.

“Under the current situation, [we couldn’t close the store]. We would have liked to, but if we’re not able to that, we’ll do the in-place remodel. It will be a complete interior renovation and decorum upgrade,” said Muckle. “It will look like…our other upgraded Safeways, of which there are now nine or ten in the area.”

We once discussed Safeway nicknames here. While we’re on the topic, anyone know of the renovation plans for the Georgia Ave. Safeway?