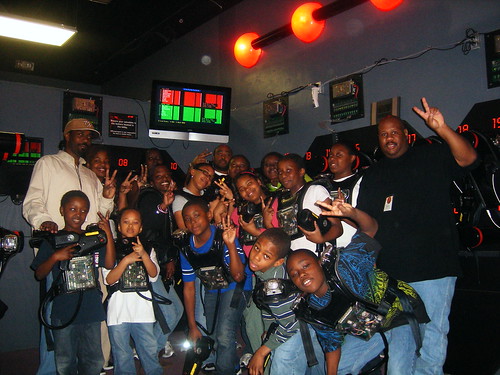 Youth violence, street harassment and the like are clearly very heated topics here at PoP, as they should be…I mean, these are serious issues. But, as we’ve seen in the past, and I’m sure we’ll see again, the internet – and the relative anonymity it provides – can be a dangerous place for discussions like this. As sad as some of the negativity and hateful comments on PoP’s post about his run-in with some rock-throwing kids made me feel, a meeting I had that very same afternoon definitely lifted my spirits. Regardless of where you stand on the issues at hand, I am hopeful that most of you will be as interested as I was to hear about what Landy Thompson and Andre Latimore are trying to do about it.

Thompson and Latimore are just as tired as anyone else of seeing kids causing trouble in the streets and no one knowing how to (or even wanting to) deal with them. They look at these kids and see good hearts suffering from a lack of love and attention at home that’s fulfilled through involvement in gangs or street crews, they see smart kids with poor self esteem, they see anger and pain that can manifest itself in ugly ways. On top of everything else, they see themselves as youth growing up in the Streets of Columbia Heights not too long ago.

Based on their own life experiences and modeled after a west coast organization called Homeboys, Inc., they are working to create their own non profit organization to reach out to at risk youth, called In Da Streets. And just as the name suggests, they are literally in the streets approaching youth, trying to deter them from fighting, bad choices, drug use, and future criminal activity. Continues after the jump. 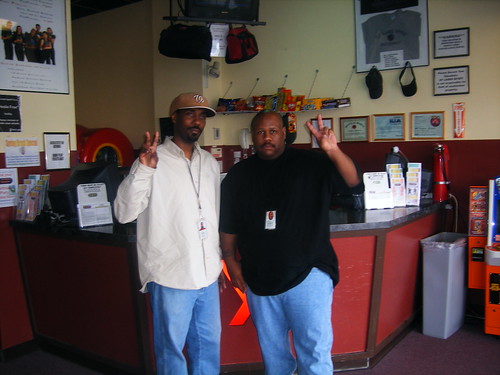 Right now, In Da Streets is just getting started but after spending a couple of hours with these guys (and joining them on a lasertag outing!) it’s obvious to me that they are passionate, driven and in this for the long haul. Though they aren’t letting things like not even having an office space yet stop them, the first order of business is locking one down. Right now they are hoping to set up shop in the Cavalier Apartment Building at 3500 14th St, which will also be home to the summer program they are organizing alongside an existing youth program that is already operating in the building.

Upon approval of their submitted budget, they will be registering up to 35 kids for a program that will meet twice weekly over the summer and focus on topics like self esteem, HIV, teen pregnancy, dealing with neighbors, and anger management (something a few of our readers could use as well, huh?) They will be using techniques like drama therapy, and bringing in guest speakers, ranging from local college students to former prisoners, who will share their own life experiences with the kids.

After the summer program concludes, the plan is to keep similar programs running year round. On top of getting kids off the streets and into forums where they can reflect on and discuss their thoughts and experiences, In Da Streets wants to help expose them to opportunities and get them into jobs that allow them to better their lives and give back to their community in a meaningful way. The hope is that once the kids realize their potential they will see that where they come from doesn’t have to limit where they can go.

Their hope is to build confidence in these kids to help them stand up to the peer pressure that can pull them into reckless behavior. I asked them how they feel about people who see these kids as nothing more than trouble makers. The response I got was a pretty frank, “Yea, these kids do bad stuff, but it’s not because they’re bad people. They’re angry, and they don’t know any better and there’s no one at home to show them a better way.” Lack of parental involvement and guidance may be the reality of the situation, but Thomspon and Latimore don’t see it as an excuse. They want to step into these kids lives and provide the support, education, and guidance they aren’t getting from anyone else. Thompson says he’s a lot of people’s brother, cousin, uncle or father…even though he isn’t actually related to any of them. He makes himself accessible and he’ll do whatever it takes to get and keep someone on the right path. In fact, just a couple of weeks ago when he found out that Sodexo was offering maintenance jobs to the first 200 people to show up, he posted fliers all over his neighborhood and drove people downtown on his own time to make sure they were able to take advantage of the opportunity.

As someone who has done a fair amount of volunteer work with at risk communities myself, it’s not lost on me that my life experiences (or lack thereof) can sometimes be a barrier to fully understanding the situations I’m trying to help remedy. While I tend to think that the attitude of “You’re right, I don’t know where you’re coming from, can you help me understand?” can be a positive one, I fully realize that some messages are never heard more clearly than from someone who has been in your shoes. This is part of the reason why I think that In Da Streets is going to be such a success. These guys know what it’s like in the streets, they know what its like to get in trouble, and they also know what it’s like to see a more conventional picture of success – Thompson graduated from Georgetown and spent a couple of years working as an outreach specialist for an organization in SE called Peaceoholics, and Latimore is part of a popular GoGo group called The Backyard Band. They can look these kids in the eye and say, “I’ve been where you’re at and it didn’t take me anywhere good. I got myself on the right path, now let me help you help yourself.”

It takes a lot of time and hard work to get an organization like this up and running. More than anything, though, In Da Streets needs support from the community, and little by little they are getting it. A recent meeting with the United Black Fund of DC has found In Da Streets some legal aid and assistance, and they have been working with the owners of the Red Derby to host some fundraising events. A couple of additional events that are in the works are a health fair and a tennis shoe drive.

This is a great organization and they have a lot of awesome plans and ideas. Landy and Andre are pushing hard and they know (and I know) that In Da Streets is really going to take off, but it would happen a lot sooner with community support! There are plenty of ways we can help – even by just showing up to one of their events, or talking them up to people you think might be interested. And of course, donations (both monetary and in kind) are always accepted. If you’re interested in supporting In Da Streets you can contact Landy at [email protected] or take a look at their website.