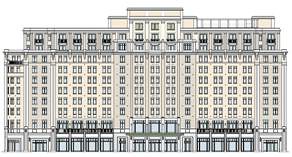 Thanks to a reader for alerting me to this info. Proposed image of the hotel courtesy of the developer, JBG. The Cardozo Shaw Neighborhood Association has lots of info:

The JBG Companies are currently working on a project proposal to develop a transit oriented, LEED Silver certified mixed-use hotel to be built at the corner of 13th and U Street, NW, replacing the existing building at this corner. This proposal, named by JBG as the “U Street Hotel,” has been the focus of much discussion in the neighborhood; JBG has provided information to CSNA about the current status of this project.

According to JBG, plans call for an approximate 4-Star hotel, best described as boutique and independently managed. The hotel will consist of as many as 250 guestrooms, 4,500 square feet of meeting space and 23,000 square feet of retail space. The hotel will include a signature restaurant, a rooftop bar and swimming pool and a proposed rotating art exhibit which will all be open to the public.

Holy cow a roftop bar and swimming pool sounds beyond cool. Do you think a hotel would be successful at this location? What do you think of the rendering?