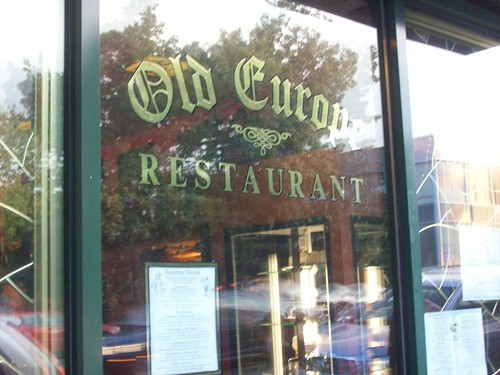 When it comes to restaurants – how much kitsch is too much? When the inside looks like a cruise ship art gallery? When there’s enough miscellaneous stuff on the walls to rival TGIFridays? At Old Europe in Glover Park (2434 Wisconsin Ave NW), you’re just as saturated with their German theme as the restaurant’s brats are with sauces. Flags of Deutschland’s 16 states, old paintings of the German countryside, and European china hang on the walls; the wait staff is decked out in authentic Bavarian costumes, and – no lie – a little old lady plays traditional music on the piano throughout the week. Old Europe restaurant has been around for 60 years, and serves every German staple imaginable: bratwurst, weisswurst (white hot dog), even zwiebelrostbraten (er, rib steak hot dog).

While the menu is pretty much meat and dumplings, it’s an appetizing assortment. Sausages are cooked through—hearty and not grease-laden. Their Schweineschnitzel, the German version of chicken-fried steak, is pork pounded thin, breaded, fried, and topped with savory sauce. What’s not to like? Imported beer and wines are a must though, if anything to act as a buffer to the carnival of all things Deutsch going on within the dining room. The restaurant’s enjoyably tacky appearance should be experienced at least once by any DC dweller (and Germans are known for being enjoyably tacky). And having consumed a lot of Kassler Rippchen and Rheinischer Sauerbraten and Schwarzwälder Hühnerbrüstchen while I lived in Berlin a while back, I think the food is quite legit. Very hard to pronounce, but legit regardless.

Any fans out there?