Get our email!
Search
Adams Morgan 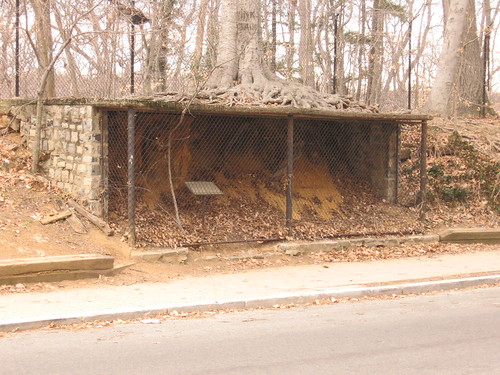 Ed. Note: Here is a little background on faults from Wikipedia.

The only visible part of the most famous overthrust fault in DC (Darton’s fault) has an amazing view of the national zoo from its perch just above where Adams Mill Rd peaks on its rise from Rock Creek Park. It sat up there as little Butterstick the Panda was born and must really enjoy the view of the creek bottom when the leaves turn in the fall. Zoo Lights evenings in December must be cool too, romantic even. If the “Fault Seeking Fault” section of Craigslist.org hadn’t been overtaken by scammers and weirdos years ago, he might have a snowball’s chance in hell of sharing those evenings with a special lady fault (Don’t hate. Faults can’t just go out and cruise happy hour looking for love like the rest of us.)

But perhaps the biggest issue for the fault since the 1920s is that it has been housed in an “exhibit”, clearly not designed by the flappers of that time, who rained reigned cool. I’ve never been at the mouth of a sealed mine, but that’s what the concrete walls and black chain link hemming in that little fault look like to me. I hope that any self-respecting flapper would have smacked whatever person or agency representatives responsible for designing that exhibit in the mouth with a beaded purse and a string of pearls on opening day.

If that agency or anyone from that design team is still kicking, they should be fitted with an ankle bracelet set to tase whenever it is within 50 yards of a drafting table. I say this because if the design sensibility encapsulated in that exhibit ever catches on I am sure that we will be opening our arms to Communism and, as much as I love a long line for bread, I’d rather not. Continues after the jump. 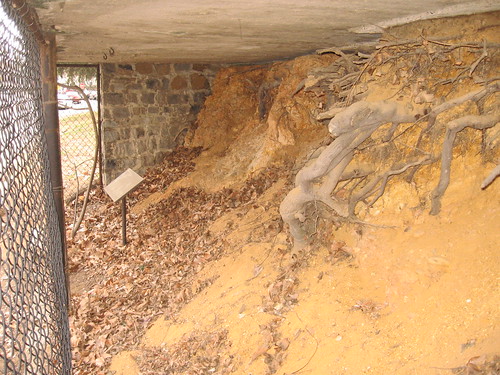 It is unclear to me, because I have not really done any significant research, as to why the geologist N.H. Darton (hence Darton’s fault) had it caged as it is. I do know that he did want to preserve it and protect it against weather and vandalism (what I wouldn’t give for a nickel for every time I set out with my high school buddies to paint “Say No To Crack” on a fault line), but did he have to hire Bunkers-R-Us to do it?

Living in the neighborhood, I have come to love that little fault. Inside the bunker there is just one well-dusted sign with virtually no discernible information, lots of leaves, a knotted tree root, and the ground. I swear that if there is a fault in that ground, it is the most ground-looking fault I have ever seen. But, like my mom tells me when I ask about Santa: seeing is not believing, believing is believing.

I’ll never tire of walking past a few tourist folk peering through the chain link and wondering what the hell is in there. There are always as many answers as there are people when I play the tourist in arms and ask them what they are looking at. Inevitably, one smart guy is convinced he knows what it is. It’s what’s left of an old building from the days of Lincoln. The tree root must be endangered. It used to be an exit from secret tunnels the President could use to escape in case of attack.

But I would give up all the answers and laughter for a facelift for that poor old fault. How about DC use some of the funds I just read about it dedicating to art over the next five years and create some art to put around that little guy. Make the coolest and weirdest overthrust fault exhibit ever. Dress him up and let him show you what an overthrust fault with a little pizzazz can do. Geology may not be hip and faults may not be sexy, but neither would a lion if he didn’t have his mane.

And, by the way, word is that there are seven faults running through the zoo. Clearly, it is a chicken or the egg question when you’re discussing which came first, the zoo or the faults. Reason leads me to reason that faults don’t get bunched up around zoos like that on accident. So, you ask: Do faults like pandas? Yes.