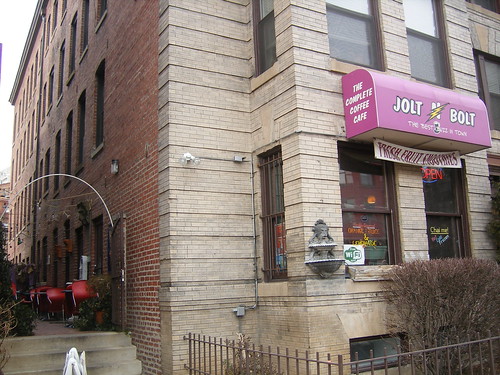 I’m going to let you all in on a little secret. A couple of months ago I joined the ranks of the unemployed. I won’t lie, some days are a little touch and go, but on the whole I am happy with my new status and am relishing in my newfound abundance of time to focus my energy on volunteering, finishing my graduate school applications (wish me luck!), taking up new hobbies like cooking and painting (not at the same time though), catching up on my reading, finishing the scarf that’s been sitting in the knitting bag since last winter, and finally getting to visit the museums during the quiet hours. For a person without a job I’ve managed to keep myself pretty busy. However, I do still have a good amount of downtime, and if it were warm I would spend much of it outdoors. But in these freezing temperatures, bike rides, leisurely strolls, and sunbathing in the park don’t sound like such great ideas. So, I’ve taken to toting my laptop or a good book over to one of the many neighborhood coffee shops.

Most of the time, because it’s so close to home, I end up at Tryst. I like it alright, the couches are comfy (though their cleanliness is dubious), no one bothers me if I order a cup of coffee and sit for two hours, and they have a good selection of treats for when I get a little hungry. But, it’s always so crowded, the service is slow, and more often than not I feel like the guy next to me is more interested in a pick up than his laptop. But anyway, this post is not about Tryst, it’s about another spot just down the road, Jolt N Bolt. I used to find myself wandering down here when Tryst was too crowded but lately, despite the freezing temperatures, I have been bypassing Tryst all together and setting up shop in the little converted row house at 1918 18th Street (just south of U Street.) Continues after the jump.

Jolt N Bolt is an old neighborhood stand by, at least since 1998 when it was listed as one of the Washington Post’s Cheap Thrills, a place where people jolt and don’t bolt but instead linger over some coffee, hold study group sessions, or just tap away at their laptops for hours on end (free wi-fi!). Since I don’t have much to study for these days, I spend most of my time there tapping away, and I’ve found it to be a great environment for just that. It’s fairly small inside, maybe about 15 little tables, and a window counter. In the warmer months there is outside seating available on the patio, I’d hardly call it an oasis in the city – but given the amount of space they have to work with I think it’s pretty cute. 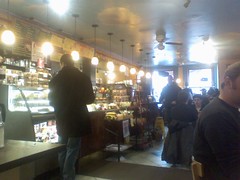 As far as the food goes, the coffee is good, they have a decent salmon bagel sandwich, and even better – a decent bagel, the oatmeal is delicious and loaded with dried fruit, nuts and honey, and the fruit smoothies are a great treat on a hot day, sometimes even on a cold one! I would advise to stay away from the baked goods, which are sometimes stale. They look delicious, but I am usually disappointed. There’s also a decent selection of teas, and a mystery drink called Goji Juice. I actually thought it was a shampoo bottle, until further inspection and research told me that the Goji berry is some kind of superfruit health drink. I cannot vouch for its powers, though. I think the prices here are pretty fair but will say that the service can be a little lacking. I might be mistaken, but I believe there was a change in ownership a couple years back. Since then, I think the service has improved and the staff is a bit more pleasant, but it sort of depends on who you get behind the register. I didn’t actually get a chance to chat with the woman who I am pretty sure is the owner, but she is almost always there and is extremely friendly. 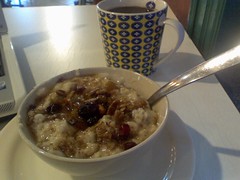 All in all, I really like this place so I recommend giving it a shot. It’s cute, a little kitschy, and I don’t think you will be disappointed. And if you are, that’s OK…it just means my table will still be open!

Read more →
More Stories
Back In The DayJudging Restaurants – Courduroy