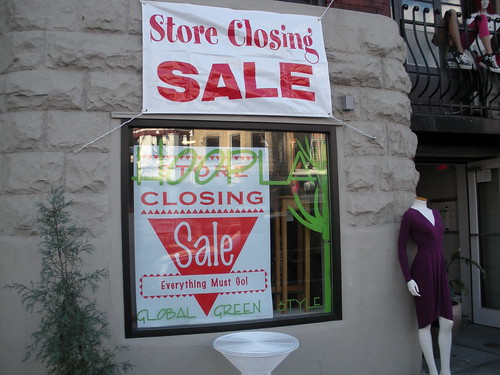 Ed. Note: Robyn’s post on the defense of Ruby Tuesday’s Salad Bar got a really interesting debate going and it has sparked a new series. You know in DC sometimes we tend to be reflexively negative about certain things. I find myself doing it too from time to time. Like I hate Georgetown. And in reality the last few times I’ve went to Georgetown, I’ve loved it. I love the old homes, the waterfront, etc. But I feel like I said “I hate Georgetown” so often it just became automatic. And not at all true. So with that in mind Robyn has come up with the idea to debunk some of the automatic negative stereotypes about certain things in DC. Thus a new series is born.

Ever heard the soundtrack to Adams Morgan at 3AM on a Saturday? It goes a little like this – to the tune of Beethoven’s 9th.

“Dude, don’t step there. Someone puked up their Jumbo slice, haha!”

Thud. Squish. (sound of inebriated human passing out spontaneously on pavement on top of their own Amsterdam falafel)

Yes, I know. The thought of venturing to Adams Morgan on the weekend seems like buying a one way ticket to an underage college frat party. The abundance of cheesy bars, keg-stand record holders, and flush-faced twenty-somethings who act like teen-somethings after they just pounded a bottle of Boones Farm does not paint a pretty picture for the 18th street strip. Yet, I find something very endearing about Adams Morgan. If you get past the jack and coke chaos cover, there’s a warm, welcoming center to the strip that’s full of culture and cool people. My motto when I go to Adams Morgan? If you can’t beat them, join them.

Reasons why Adams Morgan isn’t so bad: Vegan bar food + 50 cent High Life countdown at Asylum. 4 shots + 4 beers for $12 at Tom Toms on Thursdays. Live music at Bossa. A good bourbon recommendation at Bourbon. Frou frou Felix martinis. Dance # 145 of the night and I’m still not tired at Habana Village. Lying about being in college, and doing a shot with a student because you have the same Finite Math teacher. Who cares if it’s top #40 music? Rooftop deck at the Reef. The crowd at Bedrock Billiards. Ok, Jumbo slice isn’t ALL that bad, especially after 3AM. The chill-pill effect at Pharmacy Bar. OMG! Your (insert accessory) is sooo cute. Let’s be friends. – overheard in line for bathroom at Madams Organ. DJ nights at Napolean.

And last but not least – cheap beer and make-your-own liquor drinks at Dans Café. Pure danger.

What did I forget? Any closeted Adams Morgan lovers out there?