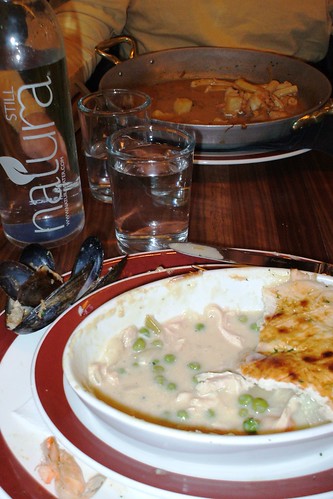 When I heard about the September opening of the new farm-to-table restaurant Founding Farmers, located at 1924 Pennsylvania Ave. NW, my eyes immediately rolled. Does DC really need another environmental-sustainable-green-flag-waving eatery that claims to only get their food from the happiest of local farm animals frolicking in barnyard paradise? Personally, I don’t care if the pork I’m eating lived a privileged barnyard life filled with arts and crafts classes and knitting groups and eating organic slop. I just care if it was treated humanely and if it’s well-seasoned on my plate.

Though after eating there, I discovered that yes, DC does need to add Founding Farmers on its list of eat-here-before-you-die joints. If at least for the environment’s sake.

First of, it looks cool. A salvaged wood (recovered from a central MD barn) concord greets you in the lobby, presided over by a statue of a sheep, “nicknamed Molly,” giggled the hostess. The bar is made out of recycled concrete, salvaged steel walls line the stairwell leading upstairs, hardwood floors are made from recycled floorboards, and all of the energy used by the restaurant is generated from the wait staff taking turns on stationary bikes hooked into the system. That last one was made up, but all in all, you couldn’t get any greener.

As we were seated next to a salvaged barn wood column, my party was told that the water we were drinking was purified by and in-house filtering system, and served in milk bottles donated by local dairy farmers. The fry grease in the fried green tomatoes you just ordered? “Well,” the waitress beamed, “that is given to a local limousine company for recycling.” Ok, ok – I get it. Founding Farmers is green. The real question is, how’s the food? It’s really quite good. We ordered a lot of their small plates, including the bacon-wrapped dates, the baby cheeseburgers, the cheese plate, and the bacon lollis (bacon on a stick candied with cinnamon and brown sugar). The green tomatoes were hearty, crispy, and tasted fresh despite being placed in a vat of enviro-grease. The cheese plate housed 6 cheeses coming from east-coast dairy farms and explained well by our waitress. And the bacon lollis – well, it was fresh bacon on a stick. For us carnivores, what’s not to like.

Anyone else been to Founding Farmers? What was your experience like?