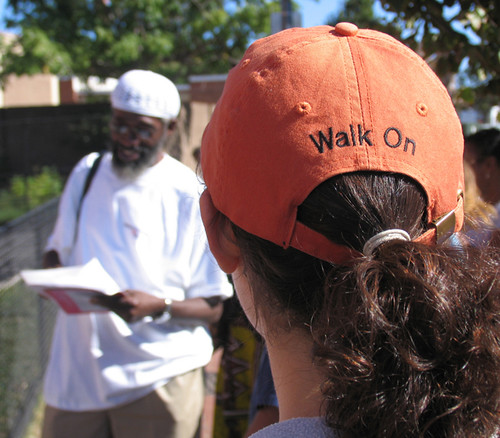 WalkingTown, DC Fall Edition celebrates alternative means of travel and exploration in the District with more than 80 free walking tours on September 20 and 21, 2008. WalkingTown tours can be found in neighborhoods from Embassy Row and the Capitol Riverfront to Anacostia and Brookland, all highlighting Washington as a walkable city.

Venture off city streets for greener spots like the National Arboretum and Rock Creek Park, or explore up-and-coming parts of the city like Capitol Riverfront, NoMa, and Southwest.

The WalkingTown, DC schedule is available complete with meeting places, times, and tour descriptions at www.WalkingTownDC.org. Professional guides, community leaders, and neighborhood residents lead the free tours and are donating their time and expertise. 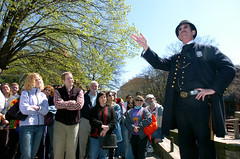 There’s a few tours close to the area. Check them out after the jump.

Bike Tour: Civil War Forts – The Defense of Washington
Saturday and Sunday, 8:30 am
Meet on John McCormack Road (Branch Trail) outside Brookland-CUA Metro station)
Reservations required: Online or by phone at 202-661-7581
This bike tour of Washington’s Civil War defenses stops at Forts Totten, Slocum, Stevens, DeRussey, and Reno Park, in addition to tracing a section of a proposed restoration of the 1902 McMillan Plan for a Forts Circle Greenway. Led by Jon Fleming and presented by the Alliance for Preservation of the Civil War Defenses of Washington and the Washington Area Bicyclist Association (WABA).

Who Was Hortense Prout? Slavery to Freedom in Adams Morgan
Saturday, 10 am
Meet on the SunTrust Bank plaza at 18th Street and Columbia Road, NW
This tour focuses on a daring 1861 escape attempt by a young African American woman enslaved by John Little, whose cattle farm spread over most of today’s Adams Morgan neighborhood. The tour goes from the site of John Little’s manor house in Kalorama Park to Walter Pierce Park, where Howard University archeologists are surveying DC’s busiest African American Civil War cemetery. Led by Mary Belcher and Eddie Becker and presented by the Kalorama Citizens Association.

History Before History: The Geologic Saga of Washington, DC
Saturday, 1 pm
Meet in the park at corner of Harvard Street and Adams Mill Road, NW
Reservations required: Online or by phone at 202-661-7581
Go back in time 700 million years! Before DC was a city it was the bottom of an ancient ocean, the center of a mountain range, a magma chamber, and a river in which dinosaurs swam. Learn the geological story of the landscape by visiting rock outcrops in Adams Morgan and Rock Creek Park. Led by Callan Bentley, assistant professor of geology, Northern Virginia Community College.

A Musical Tour of Mount Pleasant
Sunday, 2 pm Meet on 14th Street across from Columbia Heights Metro station (in front of CVS)

END_OF_DOCUMENT_TOKEN_TO_BE_REPLACED

More Stories
Do Items Get Stolen Off Your Porch?Powerful Message