It was like a dream. Over the sound of music in the restaurant one could hear a snapping, a pop, and then … nothing. The music had ceased. I had accidentally spilled malt vinegar into the sound amplifier for the restaurant and fatally wounded it. The faint smell of smoke billowed up from the top vents – the same slits that had been the recipients of the liquid spear. Pam and Brett, the only other servers working the lunch shift with me, tried to resuscitate the device to no avail. 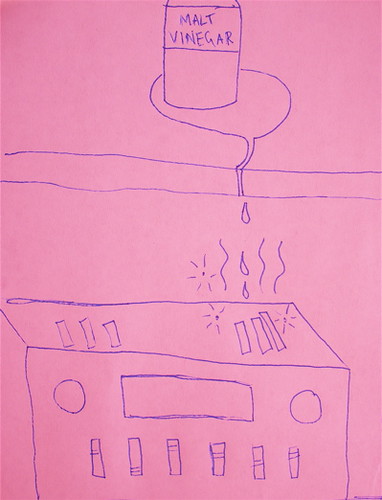 We called Jane over, the manager on duty, and Pam, who explained what had happened while I handled my tables. Jane tried to get the machine to work, but also in vain. The more time passed, the more the eerie silence inverted and became deafening. A fork dropped across the restaurant. The front door made a distinctive swish as it opened. My shoes squeaked, something I had never noticed.

The shift had to go on, so we carried on as usual, as Jane made phone calls to Christina, the general manager, and a couple of the owners. Before my shift was done, everyone knew, and I took the blame for it.

That evening, we had a front of the house meeting – all hosts, servers and managers were there, as well as “Joel,” one of the owners. We had them about once a month, to go over restaurant notes and general protocol. The meetings always reminded me of councils of war – with the generals standings towards the front, and all of the soldiers sitting at a large round table looking somber and despondent.

After the meeting, Christina and Joel asked me to come upstairs. Closing the door behind me, I sat across from Joel at his desk with Christina standing to the side. All that was missing was the spotlight and the one-way mirror. 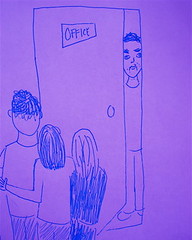 “So, as I understand it,” he began, “today there was an accident.” I nodded. “Well, I just want you to know we appreciate you, Julian, and we like having you on our team. That being said, we know that accidents happen, and that what happened today could have happened to anyone. But this just happened to be an expensive accident.”

Keeping as cool as possible, I glanced over at Christina, but she wouldn’t look at me. “Some sort of negligence had to take place for what happened, and we need you to take responsibility for it. We need you to pay for half of the cost of repair, or … or, we’re going to have to look at other options.”

Vague. Very vague. “Well, how much is it going to cost?” I asked snippily.

Joel kind of looked at me crookedly, as though the obvious question was the million dollar one. “We don’t know just yet.”

“Well then why don’t we have this conversation when you have a better idea of that.” Defensive. “Is that all?”

“Yes. But Julian – we don’t want to look like the bad guys here. Like I said before, we really like having you on our side. We’re just doing what we need to.”

With that, I walked out. Fighting back an urge to scream, I exited the restaurant and found the Princess, who was crossing the street and walking home. Running up to her, I told her what had just happened, a little frantic and feeling alone.

“That’s crazy!” she said bitterly. “How could they do this? They need you! I mean, if I were using their shitty microwave to heat up an apple crisp, and it broke, would I be responsible for paying for that? They have insurance for this kind of thing! It’s a business expense.”

Her anger invigorated me. I felt like I needed to get riled up about it. I parted with the Princess after declining a dirty martini invitation to discuss further in her condo. I needed time to think, and fortunately, I had the next two days off.

For my next shift, I left all my armor and gear at home. My wine key. My bistro apron. Instead, I went in to talk to Christina, off the clock. 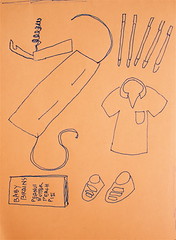 “Look, Julian,” she told me, sitting across from me in the office, “this is what’s going to happen. If you say you don’t want to pay, then Damien is going to tell me to fire you.”

They did not have a right to charge me for a penny, and I would not pay it. It was extortion, really – good restaurant amplifiers were five-hundred dollars at the most. Pay to keep my job? Where did they get off? They were rich business owners? I was a student-server.

“Damien will be in later if you want to talk to him. If I were you, that’s what I’d do.”

That night, I showed up for my dinner shift prepared not to work. I pulled Damien aside, and we sat on the empty patio to discuss the situation. I wanted to do it diplomatically. I wanted to sign the papers. It was a treaty. The war was over.

He reiterated everything I had heard before – an expensive mistake, I had to be held accountable for my actions, and that I was a good server, but I had to be let go if I didn’t pay. In the end, I told him that he would have to fire me, because I did not owe him a cent.

“And, for the record, Damien,” I said as my parting words, “there is a word for this, and its called extortion. Asking money from someone so they can keep their job? Look it up.”

“You can call it whatever you want, Julian, but at the end of the day, I’m still out a seven-hundred dollar machine … and a server.”

It seemed as though Damien wanted me out of there, and there was nothing I could do that would change his mind. A couple of my friends came out to hug me as I mounted my bike to head home. The end had come for me – the battle was over. And it made me feel unhappy.

But the more I thought about it, the more I realized that it was not the fact that I had just been fired that made me sad. It was that I would miss my friends – working with them, confiding in them, and listening to their stories. They delighted me, these people of Columbia Heights, who were all so different and created a plethora of color and culture in my life. I would miss them, most of all. 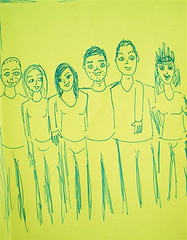 I took one last look of the building and could see Michael through the window, looking somewhat distraught. I turned my bike onto 14th street, and retreated.