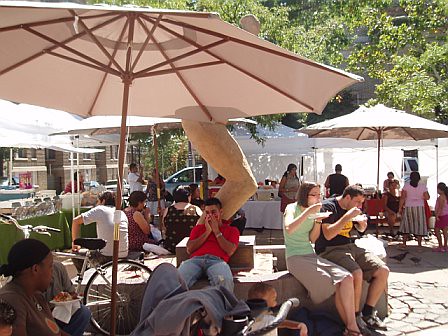 A new street market was looking lively over the Holiday Weekend at the Unity Park (Columbia/Champlain/Euclid) in Adams Morgan.

There were a dozen or so stalls selling food, crafts etc. – including a Prince of Petworth favorite – hammocks, marked at a surprisingly expensive $75.

Most of the food looked to be the usual, familiar neighborhood offerings – pupusas, tamales, bags of sliced mango, shaved ice etc. as well a stall selling prepackaged bags of nuts and other dried goods.

There was also a cool looking leather goods stall selling belts and other western items. Who doesn’t want a keychain shaped like a cowboy boot?

I’d never seen this market in action before and a quick search online yielded little. Does anyone know more about it – how long and how regularly it will run?

I sometimes feel that the humans surrendered Unity Park to the pigeons. Maybe this market will help claw back some of our territory.  More on frozen yogurt coming after the jump. 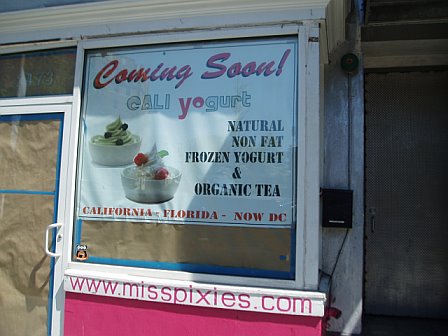 A sign in the window of the vacant, former Miss Pixie’s spot at 1810 18th St announced that Adams Morgan will welcome the latest addition to DC’s frozen yogurt fixation – Cali Yogurt, with branches in California and Florida.

I confess I’m a bit of a fan of both Tangy Sweet (P Street) and Mr. Yogato (17th Street). Although I’ve never tried the LA originals I do enjoy the slightly odd flavor, the fresh fruit toppings and the fact that I can devour a “huge” portion without the dairy and sugar overload that I usually get from traditional ice-cream.

So I’m looking forward to Cali Yogurt’s deserts and green tea in the neighborhood. Well, mostly their deserts, to be completely honest.

What I find interesting is the “herd mentality” I often observe as new spots open up around the city. Frozen Yogurt is a good example with two new and very similar spots opening up in Dupont, seemingly within weeks of each other.

Wine Bars are another example – Cork, Veranda, Vinoteca all suddenly appeared in Shaw – demonstrating, if nothing else, that there was a serious, pent up a demand in the area for $10 plus glasses of wine. Who knew?

This isn’t meant as a discussion of the products themselves (fro-yo or wine) or the individual businesses selling them. Regardless of your desire for a kite store or a roller-disco, most would agree that new, independent businesses are good for the neighborhood and if demand for their product is sufficient to cover rent, pay staff and turn a profit then fair play to them.

But when you witness the successful launch of two (or more) fro-yo joints or wine bars, do you think:

“What a great concept. It obviously works. What we need is another, similar spot.”

Or do you think:

“How much fro-yo can people really eat? Have we not yet reached saturation point?”