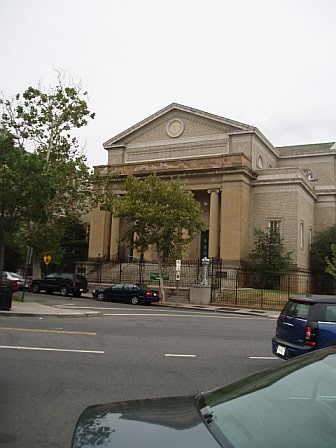 John was a bit prolific last week as he was fully rested from a holiday overseas. Below, he tells us a bit about the plans for a proposed new hotel in Adams Morgan.

Without wishing to re-ignite the debate over gentrification, Euclid Street between Columbia and 16th perfectly encapsulates the socio/economic/demographic changes occurring in DC.

A brand new Harris Teeter grocery store and upscale condominiums have opened on blocks where violent crime is a serious concern.

All this makes a rumor that a boutique hotel is slated to open in the vicinity all the more intriguing.

According to reports from Hotel Chatter and the Washington Business Journal, the First Church of Christ, Scientist, at Euclid and Champlain streets NW will be converted into a 150 room “Edition” hotel – a Marriott brand.

According to the development plans, the Euclid Street entrance will become a lobby leading to hotel’s grand ballroom (currently the church’s second-floor sanctuary.) The sanctuary’s balcony will become another gathering spot, and a 9,000-square-foot space on the first floor will become a restaurant and bar.

The guest rooms, pool and other amenities will be built on a parking lot behind the church and on property that houses the Washington City Paper.

Whether or not this plan ever comes to fruition, it is interesting to consider how much demand there would be for a hotel at that location, and the impact of such a hotel on the neighborhood as a whole.