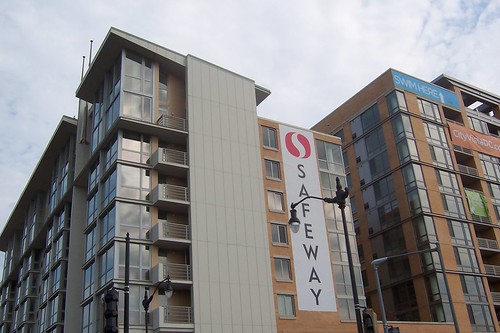 In Washington, DC, we have the peculiar habit of nicknaming our Safeways. We don’t nickname our Giants, our Harris Teeters, our Trader Joe’s, or our Whole Foods, just the Safeways.

Oh yes, he did. Mayor Fenty announced on National Public Radio, on Friday September 12th, 2008, during the opening of DC’s first new Safeway in a decade, that this one is to be called, “The Sexy Safeway”. I ran into my friend, Angela, who works nearby the Sexy Safeway and asked her if it was true. She had indeed been to the new Safeway and she verified (you have to imagine this in a British accent) that, “Yes, it’s very Sexy. It’s sexy because it’s a lot like Whole Foods.” (By the way, it has come to my attention that I can’t write the phrase “Sexy Safeway” without humming The White Album.) I went to check it out for myself over the weekend.

The Sexy Safeway is located in the Mount Vernon neighborhood at 5th and L St NW, in a corner of the building that houses the new City Vista condominium. As a real estate broker, I’ve sold several condo units in Penn Quarter and Mount Vernon. The buildings themselves are great, but the biggest complaint that people living in that neighborhood have had for years is that there were no grocery stores in the vicinity.  Story continues after the jump.

Located just off of New York Avenue NW, I found it necessary to drive around the store a bit to locate the parking entrance, which was on L Street NW. There was signage for one of the prevalent parking garage management companies, so I wasn’t immediately sure it was the parking for the store. Despite finding the store to be very crowded once I got inside, there were plenty of spaces. With validation, parking is free for one hour.

Being marketed as an “Urban Lifestyle Safeway”, the size of this store rivals that of any suburban monster. Upon disembarking from the escalator, one is immediately met with a Starbucks counter. This was somewhat reassuring, given that the size and intensity of the shopping experience definitely calls for caffeine. Each cart features a handy cup holder.

One thing that I quickly realized was that there was a ratio of about five Safeway employees to every customer. Everyone was very friendly and eager to help. It was a bit of a transition, however, getting used to being offered help every few seconds. I’m pretty sure I was offered assistance in every aisle of the store by somebody.

Despite being newly opened, the store was fully stocked. The antithesis of the Soviet Safeway, there is nothing you could possibly want for in the Sexy Safeway. I tend to not be a fan of super large stores, but it seems to be well organized. The lighting is not harsh, and the design is comfortable, with spacious aisles and a super high ceiling. Beyond the checkout is a café seating area, and easily accessible rest rooms.

Once I was ready to check out, I avoided the dreaded self checkout lanes and found a quickly moving line. The checker was experienced and friendly. The only inefficiency at checkout was regarding the parking validation, which I had to stand in line for at the customer service counter.

I’m happy to see the Sexy Safeway open. Having amenities like this downtown contributes both to the quality of urban living and keeps retail sales dollars in the District. 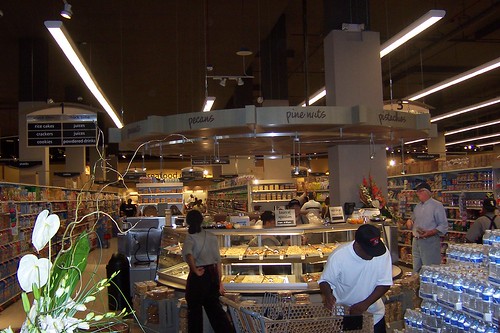 Do you think the name is accurate? Will you go out of your way to visit this spot? Will this be the bar in which all future Safeways (including the planned refurbished one on Georgia Ave.) will be measured?