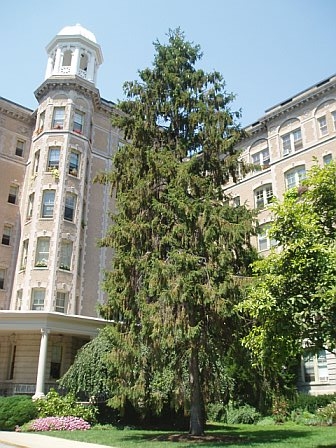 It is my pleasure to introduce John who, with his wife Anna, will be contributing a weekly post on various aspects of Adams Morgan. His first piece is on the Ontario Building (located at 2853 Ontario Road, NW) one of his favorite buildings.

The Ontario is one of the most striking apartment buildings in Adams Morgan. Tucked away on Ontario Road NW between Columbia Road and Adams Mill Road, this gorgeous “Beaux Arts” gem can easily go unnoticed in its quiet, residential setting.

The Ontario is over one hundred years old (completed in 1906.) At that time the neighborhood was known as “Lanier Heights” (according to some sources it still is, although people rarely refer to it as such), and due to its relatively high elevation boasted “pure air and freedom from malaria!”

The building has two lobbies, each lined with brass mailboxes. The halls have terrazo floors. A spacious, airy dining room operated for some years in the basement room, which is now used for membership meetings. The basement also includes a social room with an antique pool table and a number of small rooms designed as sleeping quarters for maids (now used for storage.)

The building was a rental property until 1953 when it became a cooperative. It survived the deterioration and dramatic revival of the neighborhood, as well as various internal disputes. In the 1960s, for example, the Ontario found itself at the center of a civil-rights dispute when the co-op Board declined an African-American applicant. A federal lawsuit was launched in response to this discrimination and after six months prosecutors and the cooperative reached an agreement. The applicant was eventually admitted to the cooperative where she lived until well into the 1980s.

The Ontario now welcomes residents without regard to their color, race, religion, sexual orientation, or national origin. Post continues after the jump.

The Ontario prides itself on fostering a community spirit among its residents, evidenced by a really amazing service it offers: a committee whose responsibility is, in part, to help out neighbors when they need it. This includes arranging for meals or grocery deliveries during an illness, offering a ride to a doctor, or for pet or plant care during a vacation.

Another wonderful perk offered by this building is a communal herb garden – anyone who has ever found them self craving a Mojito but lacking in that all important fresh mint will appreciate the value of an onsite herb garden.

The Ontario also boasts a roof deck with views of the National Cathedral, an awesome gazebo, beautifully tended gardens and is featured in the Washington: Best Addresses book. 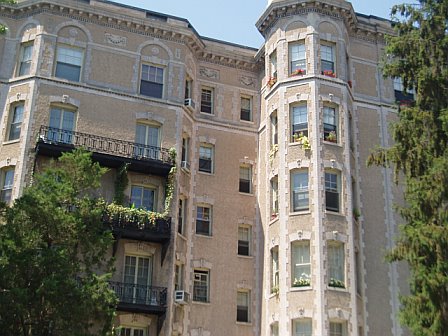 The Ontario evokes a different era of genteel apartment living. It would be interesting to compare how some of the new, high end buildings going up in the neighborhood approach the important issue of community life. Has anyone heard of another building offering to water residents’ plants when they are on vacation? 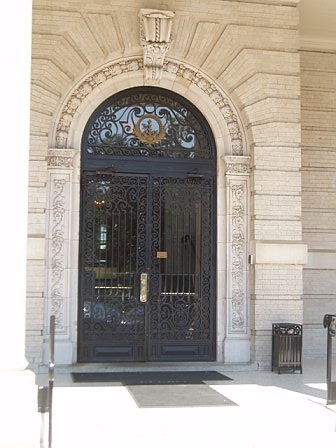 For more information and pictures, visit Ontario website, or check out some wicked pictures of a 2 bedroom apartment that was listed last year for $689,000.