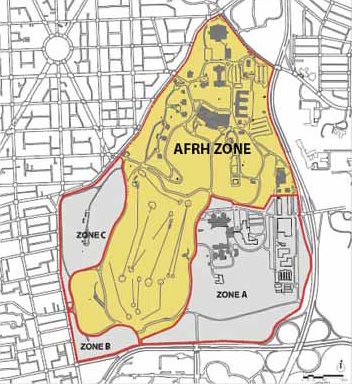 DC Mud is reporting that Zone A of the Armed Forces Retirement Home has been approved.

“Zone A will host the most extensive development of the four zones and is slated for improvements to take on an “urban character with a building typology that is sympathetic to the character and scale of existing AFRH contributing buildings and landscape…” EEK Architects have been working with the development team, a partnership between the General Service Administration and Charlotte-based Crescent Resources, LLC, to create a mix of uses that could potentially include research, office, residential, hotel, retail, and educational uses through private leases. The maximum allowable gross area will be 4.3 million s.f. with over 6,000 parking spaces.”

So is this good news or not? Do you think a potential hotel would be successful in this location?

More Stories
Good Deal or Not? Million Dollar EditionWas There A Mini Storm Yesterday That Only Hit Columbia Heights and Petworth?